6 extinct birds once found in Seychelles 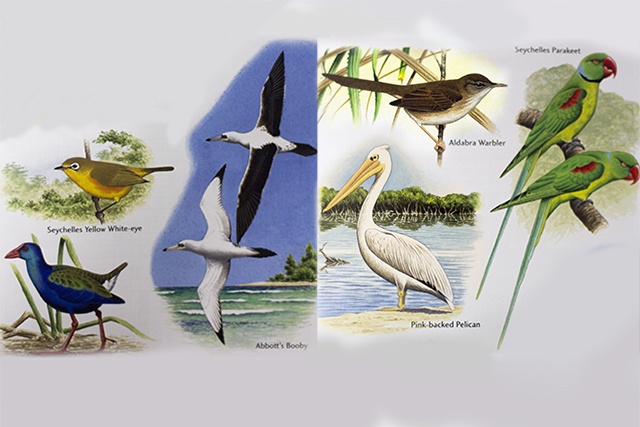 (Seychelles News Agency) - Well known for its rich biodiversity and unique natural beauty, the Seychelles’ archipelago is also a leader and champion in conservation and environmental issues. The island nation places a lot of importance on the protection of its endemic species but alas some have already been extinct.

SNA presents six birds that used to be seen in the Seychelles but have today completely disappeared.

This species was first discovered in 1967 located on Malabar on the, Aldabra atoll. Endemic to the atoll which is a UNESCO World Heritage Site, after November 1975, scientists observed only males in the area, with the last sighting in 1983. It is believed that predators such as rats are responsible for the extinction of this species.

Also known as Seychelles island parrot, this species was green in colour with a red beak and a red patch on its wing. The Seychelles parakeet was first recorded in 1811 and it is suspected to have become extinct due to intense persecution by farmers and coconut plantation owners. The species which was as seen as pests and detrimental for the plantations was endemic to Mahe and Silhouette and sighted once on Praslin. British ornithologist Edward Newton first noted in 1876 that the population was under threat. Famous artist Marianne North painted a pair of Seychelles parakeet on Mahe in 1883. The species were last recorded in 1893.

This species was also known as Seychelles chestnut-sided white-eye and Marianne white-eye was a small bird in the white-eye family. It was from the small granitic islet of Marianne Island hence its other name. There are unconfirmed reports that they were also found on Praslin, La Digue, Silhouette and Mahe. Due to habitat destruction through agricultural development, it presumably became extinct around 1888. A specimen can be found in the Natural History Museum in London.

The pink-backed pelican was once found as a colony of around 100 on the St. Joseph Atoll in the Amirantes, a group of coral islands of the Seychelles. In 1892, American William Abbott collected a specimen of the pink back pelican and described them as the only colony in ‘these seas’. By the 1930s, the species was extinct. It is believed that the pink black pelican disappeared after its habitats were destroyed.

Also known as poule bleue (blue chicken) because of its colour -- the species was first mentioned by the Marion Dufresne’s expedition in 1768. With colourful blue feathers and vivid red beak and feet, the species was first seen in the northwest of the main islad Mahe, but later found to be all over the island. The expedition reportedly killed one and described it as resembling a large chicken. A sub-district in the southern district of Baie Lazare is named after it -- Anse Aux Poules Bleues.

These seabirds were spotted and lived on the island of Assumption, a small island around 1, 135 kilometres southwest of Mahe. In 1895 it was described that “boobies and fous of different kinds were seen in trees all over the island.” In 1908, a settlement was built on the island to mine guano -- the excrement of the seabirds. This proved detrimental to the colony as trees and other vegetation were destroyed and the birds lost their habitat. The boobies were also exploited for their meat. By 1916 the species were all destroyed.

Note: Photos of the birds were taken from the book 'Birds of Seychelles' by Adrian Skerrett.