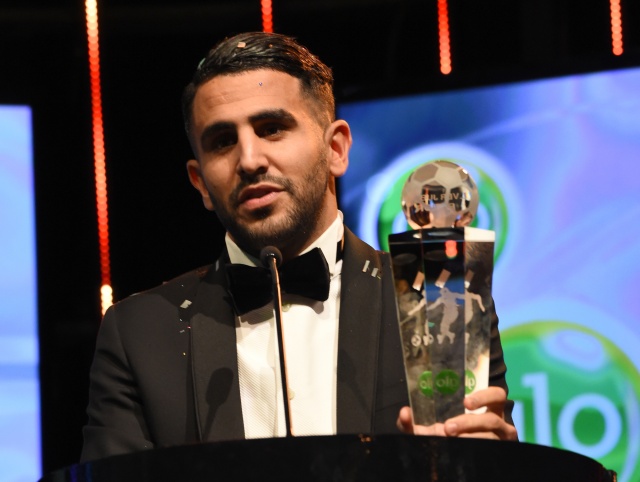 Algerian and Leicester forward Riyad Mahrez holds a trophy after being crowned African Footballer of the Year in Abuja, on January 5, 2017. Algerian and Leicester striker Riyad Mahrez has been crowned the CAF African best Footballer for 2016 and beating former best player and Gabonese forward Pierre-Emerick Aubameyang and Sehegalese striker Sadio Mane, for the continent's most prestigious individual award.
(PIUS UTOMI EKPEI / AFP)

(AFP) - Reigning African Player of the Year Riyad Mahrez of Algeria failed to make the 30-nominee list of contenders announced Wednesday for the 2017 award.

The winger was a key figure in the Leicester City side that defied 5,000-1 odds and stunned the football world by winning the 2015/16 English Premier League title.

But his form subsequently slumped and he was axed by Algeria, whose results have declined dramatically since reaching the second round of the 2014 World Cup in Brazil.

Five Premier League stars are among those hoping to succeed Mahrez when the African Player of the Year is announced in Ghana on January 4.

Liverpool forwards Mohamed Salah of Egypt and Sadio Mane of Senegal will be among the favourites for the leading CAF individual award.

There are four nominees from Spain's La Liga and France's Ligue 1, two from the German Bundesliga, but none from Italy's Serie A.

Prolific Borussia Dortmund forward Pierre-Emerick Aubameyang, the 2015 African Player of the Year and runner-up last year, is likely to be another strong contender.

Voted the best player of the Cup of Nations in Gabon, Bassogog was less effective in World Cup qualifying as Cameroon failed to qualify for the 2018 finals in Russia.

Uganda goalkeeper Denis Onyango, who plays for South African club Mamelodi Sundowns, is among 30 nominees for the Africa-based Player of the Year, an award he won last year.

Another South Africa-based contender is former New Zealand striker Jeremy Brockie, who hails from the rugby heartland of Christchurch.

His 10 goals have helped SuperSport United qualify for the CAF Confederation Cup final against TP Mazembe of the Democratic Republic of Congo later this month.

Nominees for other awards, including best national team, club and coach, will be announced later.