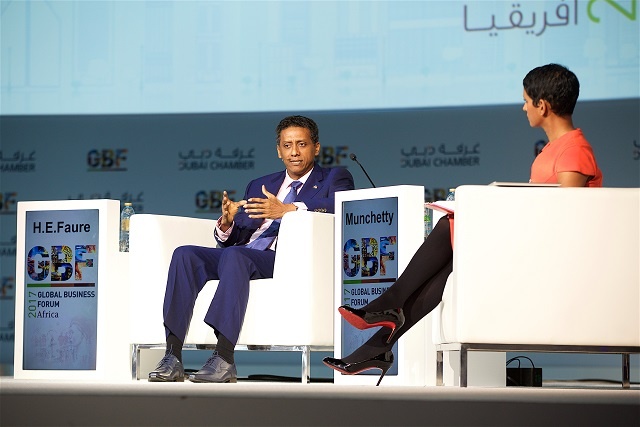 At the Forum in Dubai, Faure shared the experience of Seychelles’ leadership role in the African continent. (State House)

(Seychelles News Agency) - President Danny Faure of Seychelles shared details of the programmes driving the economic engine of the island nation at the Global Business Forum on Africa on Thursday.

Faure was speaking on the final day of the high-level forum organised by the Dubai Chamber of Commerce from November 1-2.

Seychelles, an archipelago in the western Indian Ocean, embarked on a macroeconomic reform programme in November 2008 to address external debt difficulties. The island nation requested the assistance of the International Monetary Fund (IMF) to put the domestic economy on a sustainable path.

In his State of the Nation’s address in February, Faure had said, “It is clear that together we have put in place a strong macroeconomic framework which has allowed us to reach our current point.  We have a solid base from which to launch ourselves into the next decade from an economic and financial perspective.”

Although a small island developing state, Seychelles has shown remarkable leadership in areas such as the Blue Economy and maritime security. The island nation has received the support of the World Bank to issue the first Blue Bonds in support of sustainable fisheries, a debt swap to develop a marine spatial plan of the island nation’s Exclusive Economic Zone and designate 30 percent as marine protected areas,

At the ocean Conference last month, Faure had said that “Maritime security is an extremely important component of the sustainable development of the ocean economy. One of the expected results of the blue economy strategy is greater protection for Seychelles’ ocean space.”

The president of the island nation told the 1,200 delegates at the Forum of “the important role of transparency, accountability and good governance and the building of strong institutions as the way forward to meet the challenges of our times.

Faure also called on governments and the private sector to build a new alliance and a stronger partnership that will allow Africa to use the opportunities created by new technologies to catapult the improvement in the quality of life of its citizens.

The Global Business Forum on Africa has become a reliable platform for exploring the continent’s economic outlook both current and future and this is evident in the number of high-profile participants from Africa in the event since it started in 2013.