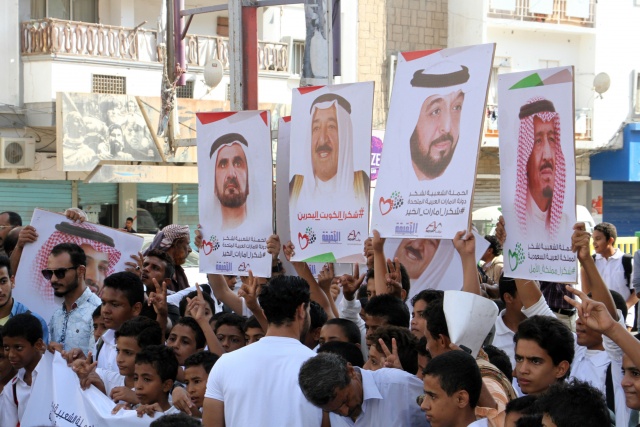 Yemeni protestors carry placards bearing the portraits Gulf leaders of during a demonstration in support of Saudi Arabia, after the Saudi-led coalition said Yemeni rebels have launched a ballistic missile earlier in the week that was shot down near the holy city of Mecca, in Yemen's second city of Aden on October 30, 2016. Huthi rebels launched the missile "toward the Mecca area" on October 27 from their Saada province stronghold across the border, a coalition statement said.
"The air defence was able to intercept and destroyed it about 65 kilometres (40 miles) from Mecca without any damage."
The rebels' sabanews website said their ballistic missile targeted Jeddah international airport. (SALEH AL-OBEIDI / AFP)

(AFP) - Saudi Arabia on Saturday intercepted and destroyed a ballistic missile over Riyadh after it was launched from conflict-torn Yemen, with debris landing inside the capital's international airport, officials said.

The missile attack claimed by Iran-backed Shiite Huthi rebels was the first aimed at the heart of the Saudi capital, underscoring the growing threat posed by the raging conflict in Yemen.

Residents in Riyadh reported a loud explosion near the King Khalid International Airport just north of the city after the missile was shot down, but authorities reported no major damage or loss of life.

"This evening a ballistic missile was fired from Yemeni territory towards the kingdom," the Saudi Press Agency quoted coalition spokesman Turki al-Maliki as saying late Saturday.

"The missile was launched indiscriminately to target the civilian and populated areas. Shattered fragments from the intercepted missile landed in an uninhabited area of the airport and there were no injuries," he added.

Huthi rebels, who fired the missile from Yemeni territory more than 1,200 kilometres (750 miles) from Riyadh, said they were targeting the airport, according to the Huthis' Al-Masirah television channel.

Civil aviation authorities said the airport was functioning normally and that flights were operating as scheduled, though residents said security vehicles had closed off some roads.

Saudi forces have shot down Huthi missiles before with Patriot surface-to-air missiles purchased from the United States, but few have come so close to a major population centre.

In July, a ballistic missile fired from Yemen was shot down close to Mecca, a month before the annual Hajj pilgrimage to Islam's holiest site.

The attacks highlight how the war in Yemen is increasingly spilling across the border since a Saudi-led coalition began its military intervention in 2015.

Saudi Arabia led the intervention to prop up the government of President Abedrabbo Mansour Hadi after the Huthi rebels forced him into exile.

But two years later, the kingdom appears to be in a quagmire.

Hoping for a quick victory against what it saw as Iranian expansionism in its back yard, Riyadh has so far been unable to remove the Huthis from Yemeni capital Sanaa.

Aside from occasional missiles, Saudi territory has also been hit repeatedly by the rebels' cross-border incursions, raising fears the conflict could drag out yet further.

In the frontier provinces of Jizan and Najran, thousands of mortar rounds and crude rockets have hit schools, mosques and homes.

Thousands of residents have been evacuated from border towns across the southwest to create a buffer zone.

United Nations-backed talks have failed to broker a political settlement to end the fighting in Yemen, which has left more than 8,600 people dead since the coalition intervened.

A cholera outbreak has claimed more than 2,100 lives in Yemen since April as hospitals struggle to secure supplies amid a coalition air and sea blockade.

The UN has warned that Yemen now stands on the brink of famine.