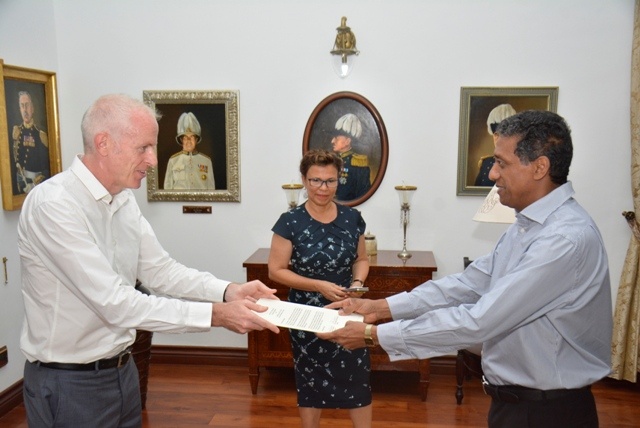 Ireland also depends greatly on tourism and fisheries, and the two diplomats touched upon how both countries can come together to maximise the benefits of these two industries. (Thomas Meriton, Seychelles News Agency)

(Seychelles News Agency) - The Blue Economy and tourism are two main areas of cooperation that Seychelles and Ireland can work on together, the first Irish ambassador to the island nation in the western Indian Ocean said Tuesday.

“As Ireland is a small island state like Seychelles, we spoke about the importance of the Blue Economy, which is important for both countries,” said Sherlock.

He added that Ireland also depends greatly on tourism and fisheries, and the two diplomats touched upon how both countries can come together to maximise the benefits of these two industries.

Discussion about the Blue Economy was further held with Vice-President Vincent Meriton, who holds the portfolio.

“We spoke a little about COP23 in Bonn, which is happening this week, and also the importance of protecting the environment and how Ireland, together with Seychelles, have worked very closely in New York in terms of the Sustainable Development Goals,” said Sherlock, referring to the UN climate conference taking place now in Bonn, Germany.

Bilateral relationships between Seychelles and Ireland have existed since 1999.

Talking more about tourism, Sherlock said that Seychelles and Ireland have had a nice partnership over the years. “In Ireland, we have some of the best universities in the world and there are many people who have come from the Republic of Seychelles to study in our universities, and one of them is Shannon College.”

Touching upon climate change, the ambassador told the press that the two island states need to come together to get clear actions on how to move forward.

“Ireland is far away from Seychelles, but we have many things in common, including our belief and values around openness, transparency, equity, and inclusiveness. Though the countries are far apart, we are actually quite close when it comes to many issues,” said Sherlock.

As the first Irish ambassador to the Seychelles, he said he is committed to seeing the bilateral relationship between the two countries strengthen. He sees his role as being the mean by which organizations that have an interest in Ireland can be channeled through.

Talking about the recent report from Seychelles' auditor general in which Irish nationals are involved in a missing $6.7 million, the ambassador said that he has been briefed by the president and is aware of the on goings.

Sherlock will be based in Dar Es Salaam, Tanzania.

President of Seychelles travels to Kenya for conference on population, development