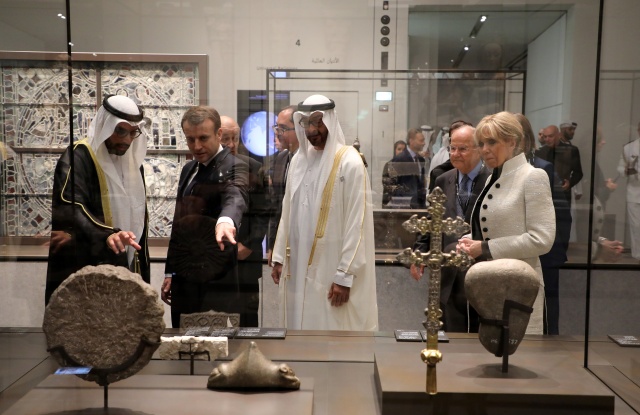 French President Emmanuel Macron (2nd L) and his wife Brigitte Macron (R) look at a piece of art as they visit the Louvre Abu Dhabi Museum on November 8, 2017 during its inauguration on Saadiyat island in the Emirati capital. (ludovic MARIN / POOL / AFP)

(AFP) - More than a decade in the making, the Louvre Abu Dhabi opened its doors Wednesday, winning praise from visiting French President Emmanuel Macron as a "bridge between civilisations" and religions.

On his first official visit to the Middle East, Macron and his wife Brigitte were greeted at the museum by Abu Dhabi Crown Prince Sheikh Mohammed bin Zayed and Dubai ruler Sheikh Mohamed bin Rashed al-Maktoum.

Macron, who is also scheduled to hold talks with Emirati officials, toured the 12-gallery museum -- the first to carry the famed Louvre brand outside France -- shortly after touching down in Abu Dhabi, along with the heads of state of Morocco and Afghanistan.

The new museum was a "bridge between civilisations", he said at the opening. "Those who seek to say that Islam is the destruction of other religions are liars."

Macron said the museum and its artworks from Europe, Africa and Asia were proof that "our religions, our civilisations are linked".

The opening comes a decade after France and the United Arab Emirates (UAE) agreed to a 30-year partnership initially reported to be worth $1.1 billion, including nearly half a billion dollars for the rights to the Louvre brand alone.

The museum design, by France's Pritzker prize-winning architect Jean Nouvel, conjures up the image of an Arab medina as seen through the eyes of a contemporary cinematographer.

A silver-toned dome with perforated arabesque patterns appears to float over the white galleries, creating what Nouvel describes as a "rain of light".

To reach the ground, each ray of light must cross eight layers of perforations, creating a constantly shifting pattern that mimics the shadows cast by palm trees or the roof of a traditional Arab market.

The Louvre Abu Dhabi is the first of three museums to open on Saadiyat Island, where the UAE plans to launch the Guggenheim Abu Dhabi, designed by Frank Gehry, and Norman Foster's Zayed National Museum.

Some five percent of the museum, which will open to the public on Saturday, is dedicated to contemporary and modern art, including a monumental piece by China's Ai Weiwei.

His 23-foot-high "Fountain of Light" is a spiralling structure draped in crystals inspired by communist plans for a massive monument that never actually saw the light of day.

The main focus, however, is on world history and religions.

Among the exhibits are an early Koran, a gothic Bible and a Yemenite Torah, facing each other and open at verses carrying the same message.

Jean-Luc Martinez, president of the Louvre in Paris, said the new museum was designed "to open up to others, to understand diversity" in "a multipolar world".

It currently has some 300 pieces on loan, including an 1887 self-portrait by Vincent van Gogh and Leonardo da Vinci's "La Belle Ferronniere".

The Louvre Abu Dhabi is displaying more than 235 works of art from the Emirati collection, including Edouard Manet's "The Gypsy" and works by Dutch abstract artist Piet Mondrian and Turkey's Osman Hamdi Bey.

The authorities have put in place strict measures to protect the art from the heat in a country where summer temperatures soar well above 40 degrees Celsius (more than 100 degrees Fahrenheit).

The artworks are also guarded by Emirati forces in coordination with French experts.

The museum expects to welcome around 5,000 visitors in the first few days which follow the public opening on November 11, according to Mohammed al-Mubarak, chairman of the Abu Dhabi Culture and Tourism Authority.

"Because this is an international museum, we're expecting visitors from around the world," Mubarak said during a media tour ahead of Wednesday's inauguration ceremony.

The Louvre Abu Dhabi project initially sparked heated debate in France, where criticism erupted early on over the sale of a French name to an Arab state.

Questions of labour rights have also hung over the project, linked to the overall status of migrant workers in the Gulf.

The opening of the Louvre Abu Dhabi comes after a more than five-year delay.