UN peacekeeping missions under pressure to reform in Africa 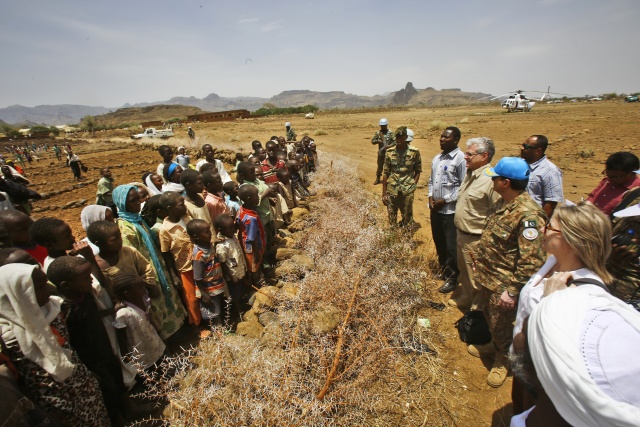 Crowds of children and villagers gather to welcome Steven Koutsis (3rd-R), the United States' top envoy in Sudan, in the war-torn town of Golo in the thickly forested mountainous area of Jebel Marra in central Darfur on June 19, 2017. The town was a former rebel bastion which was recently captured by Sudanese government forces. The top US envoy in Sudan began a four-day trip to Darfur on June 18, 2017 to assess security in the war-torn region as the UN prepares to downsize its 17,000-strong peacekeeping force. (ASHRAF SHAZLY / AFP)

(AFP) - African leaders called this week for an overhaul in the way peacekeeping missions are handled on the continent, as the United Nations itself reconsiders its deployments in an age of cross-border terrorism.

Eight of the UN's 15 peacekeeping missions are based in Africa, and several are beset by problems relating to insufficient equipment and mandates ill-suited to the countries in which they operate, while some are accused of abuses against the local population.

These UN deployments are involved in some of the world's most entrenched conflicts, from rebel groups fighting in the Democratic Republic of Congo to jihadists roaming northern Mali, to South Sudan, where a civil war has created more than a million refugees.

The leaders of Mali, Senegal and Rwanda gathered with military officials and experts this week for the annual Dakar International Forum on Peace and Security, in which a strong desire for reform was apparent throughout the speeches and debates.

"We cannot maintain peace where it does not exist, in those areas we must re-establish it," noted Senegalese President Macky Sall, whose nation is due to send 1,500 police and troops to troubled neighbour Mali at the end of the year.

Mali is beset by jihadist violence and banditry in its north and centre, despite the presence of a UN peacekeeping mission for four years and a French counter-terror force.

"Faced with asymmetrical violence, peacekeeping missions experience difficulties, to the point that they are sometimes forced to dedicate their resources to their own security," African Union Commission Chairman Moussa Faki Mahamat noted at the forum.

The UN's Mali mission is the world's most dangerous active deployment, with more than 140 peacekeepers killed since its launch, 89 of them by enemy action.

It faces a lack of helicopters to monitor the harsh terrain of Mali's desert, and is constantly targeted at its bases and on patrol by rocket attacks and gunfire.

The UN's Mali mission chief, Mahamat Saleh Annadif, said it also had responsibilities in the sectors of justice, human rights and implementing a stall peace process. "Terrorism stops us from doing our job, that's where we must find the solution," he told AFP.

Elsewhere, the United Nations on Monday opened an independent investigation to determine whether UN peacekeepers responded appropriately to an outbreak of violence between May and August this year in the Central African Republic.

The mission known as MINUSCA deployed in 2014 with a strong mandate to protect civilians, but beyond the current enquiry it has also been hit by a string of sex abuse allegations against its peacekeepers.

MONUSCO, the UN stabilisation mission deployed in the Democratic Republic of Congo, has been accused of inefficiency, despite the world body intervening repeatedly in the country since 2003.

Rights monitors have repeatedly voiced concern over killings and rape in troubled parts of DR Congo, notably in the Kasai region and North Kivu, and about harassment of journalists and political opponents.

These glaring gaps are all the more pressing at a moment when the United States has called for streamlining missions, becoming the driving force behind a $600-million cut to the UN peacekeeping budget this year.

Ministers are meeting under the UN umbrella in Vancouver on Tuesday and Wednesday to discuss potential reforms to peacekeeping missions.

"Certain UN peacekeeping mission have been successful, such as in Ivory Coast and Liberia, while others have problems," said Jean-Pierre Lacroix, the UN's peacekeeping chief.

"Several of our operations are based where politics moves slowly and in increasingly perilous security situations," he added.

The solution, Lacroix said, was "adapting, having the best possible equipment to lessen vulnerability to attack, and to be more mobile".

The future would likely evolve in the direction of the Sahel currently, where the French-backed G5 Sahel force, an anti-jihadist military initiative with troops from Burkina Faso, Chad, Mali, Mauritania and Niger, has just completed its first operation.

"Peacekeeping forces and the anti-terror fight will be complementary," Lacroix said.