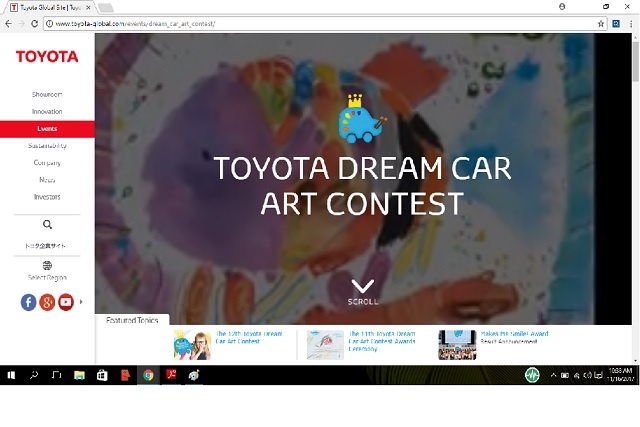 (Seychelles News Agency) - A local company, Abhaye Valabhji, is holding the national version of the “Toyota Dream Car Art Contest”, a competition that brings together children across the world to share ideas about the future of the automobile through drawings.

The company is inviting children aged 15 and under to take part in the contest taking place November 2 to February 16.

“Toyota Dream Car Art Contest” is divided into three categories – under 8, 8 to 11 and 12 to 15 years old. The hand-drawn artwork can be done in any standard drawing medium – colouring pencils, crayons, watercolours or markers.

Organised by Toyota, the competition comprises a national and world contest. Each of the 84 participating countries will hold their contests between November 2017 and March 2018.

All winners will be entered into the world contest that will be held in Japan in August 2018.

“Once in Japan, a panel of international juries choose the best three artworks in each category from all participating countries and the winners get to visit Japan to collect their prizes,” said Clifford Mondon, the business development manager at Abhaye Valabhji Group.

The contest’s website states that “amazing ideas are born from dreams [and they] hope that drawing their dream cars lets the children not only have fun but realise how vital their dreams are.”

The competition which started in Japan in 2004 was only expended as a global contest in 2011.  It is part of Toyota’s social contribution initiatives and in “2016 alone, there were more than 850,000 entries from approximately 81 countries and regions around the globe.”

The 11th edition was the first time that Abhaye Valabhji held the competition in the 115 island archipelago in the western Indian Ocean. Though the local contest ran for only three months – January through to March - a total of 116 Seychellois children took part.

“The local jury had a tough choice to choose the best nine artworks as the children’s drawings were filled with ideas,” said Mondon during the prize giving ceremony.

Mondon added that this year, children from Seychelles will have more time to spend on their artworks and can even work on them during their December school holiday.

“We are hoping that this year more schools will participate and will be better prepared. Hopefully, we will be able to make Seychelles proud by sending one child to Japan,” said Mondon.