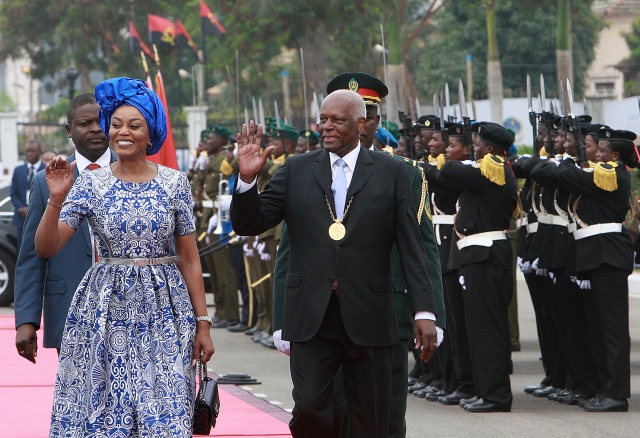 Incunbent Angolan President Jose Eduardo dos Santos (R) waves as he arrives to attend the swearing in ceremony for the newly elected Angolan President Joao Lourenco (not in picture) on September 26, 2017 in Luanda. Angola's opposition accuses the ruling People's Movement for the Liberation of Angola (MPLA) party of suppressing dissent and the Dos Santos family of bleeding the country dry through corruption and decades of mismanagement. (AMPE ROGERIO / AFP)

(AFP) - Angolan President Joao Lourenco on Wednesday fired his predecessor's daughter from her influential post as head of the Sonangol state oil company, the presidency said in a statement.

The sacking marks a watershed moment in Lourenco's young presidency as he seeks to assert his authority and clear out the legacy of his controversial predecessor Jose Eduardo dos Santos, who ruled with an iron grip for 38 years.

Lourenco swept to power as the ruling party's candidate in August elections after pledging to clean up Angola's endemic graft, tackle nepotism and revive its listless economy.

"Under the powers vested in him by the constitution, the president... has decided to relieve the following directors who make up the board of Sonangol," said the statement, which named the former president's daughter Isabel.

During his campaign to win the presidency, Lourenco, the 63-year-old former defence minister, vowed to distance himself from his all-powerful predecessor who remains head of the ruling party.

"Nobody will be above the law," he told foreign media on the eve of his election victory.

Known derisively as "the princess", 44-year-old Isabel became the public face of the Dos Santos business empire during her father's presidency.

Isabel dos Santos described herself as an "entrepreneur" on her Twitter account and the US-based Forbes magazine claims that she is Africa's richest woman.

It estimates that her personal fortune could be as much as $3.3 billion (2.8 billion euros).

She also holds 25 percent of the capital of Portuguese media giant NOS and has invested heavily in the banking sector.

Isabel's removal from Sonangol's top job comes as a surprise, for she had often stated that she wanted to remain in the top job.

"The job of Sonangol is not dependent on the electoral process... I want to continue," she said ahead of the August elections.

Isabel has faced increasing pressure from foreign oil companies in recent weeks, according to Alex Vines, an analyst at the Chatham House think tank in London.

"A number of international oil companies wrote last month to President Lourenco asking for reform... structural reform of Sonangol is the result," he said.

Benjamin Auge of the French Institute of International Relations added that Lourenco was unable to control Isabel and "preferred to have his hand on the economic heart of the country".

Angola's opposition accuses the ruling People's Movement for the Liberation of Angola (MPLA) party of suppressing dissent and the Dos Santos family of bleeding the country dry through corruption and decades of mismanagement.

Black gold provides 70 percent of Angola's revenues and almost all of its hard currency, but many of the country's citizens are mired in poverty.

Even through the collapse in oil prices in recent years, crude has remained Angola's leading revenue source.

Angola, which along with Nigeria is one of Africa's top oil producers, has been in the grip of an economic crisis since 2014 as the global price of oil has remained flat.