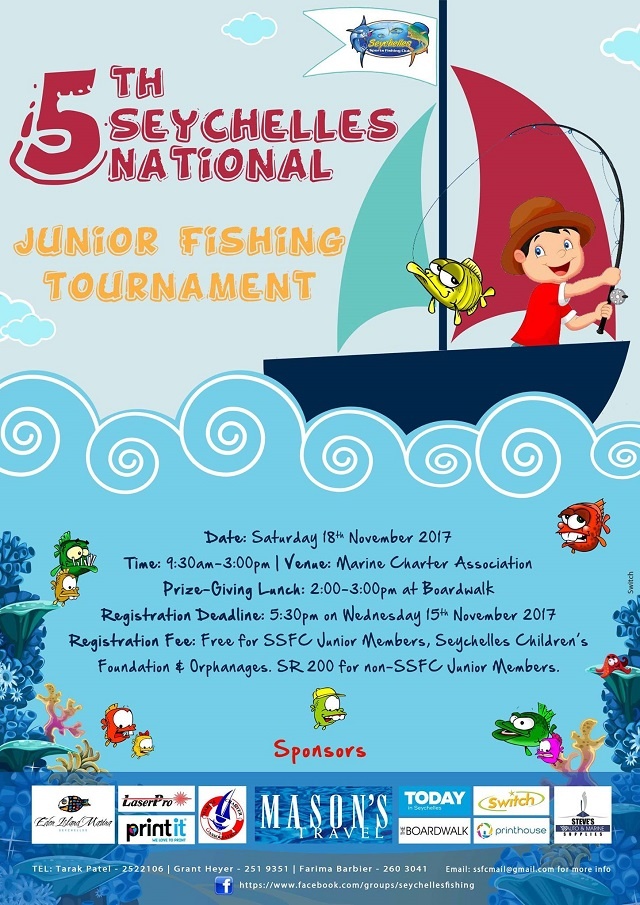 (Seychelles News Agency) - Seychellois children get the chance to go fishing in a national junior tournament set for this weekend. The tournament - open for kids between 4 and 16 years - is the largest and only boat-based junior fishing tournament organised in Seychelles.

Tarek Patel -- the chair of the Seychelles Sports Fishing Club -- the organiser of the tournament, said the initiative started five years ago.

"The executive committee wanted to encourage young children to take up the sport. We also take about 50 less fortunate kids from orphanages around the country to give them a chance at practising a sport which can also become a career."

Patel said that younger children get to fish close to the main island of Mahe while the bigger kids get to go further out at sea.

"The younger kids will be behind Sainte Anne island and the older juniors will be going on the club members boats a few miles away to try their luck at catching bonito, dorado, sailfish and red snapper."

Patel added that the tournament does not target any specific fish "as we want the kids to grasp the basics of the sport and the correct techniques." He explained that through the sport they also get to teach the younger generation about the importance of protecting the marine life and the environment in general.

"The catch of the younger kids are all released. This is to teach them about the conservation aspect of fishing." The older children get to keep their catch which is later donated to the orphanages of the island nation.

The Seychelles -- a group of 115 islands in the western of Indian Ocean -- spread over an Exclusive Economic Zone of 1.37 million square kilometres, is a fishing enthusiast's dream. Each year, the Seychelles Sports Fishing Club organises six tournaments for adults and one junior tournament.

Fishing is the second top contributor to the Seychelles economy.

Patel said "the kids will be allocated to different supervisors on the boats. The boats are participating against each other and the kids are part of the team."

Winners of the junior fishing tournament which will be held this Saturday will receive trophies. 110 children have registered for this year's event among which 50 are returning participants.