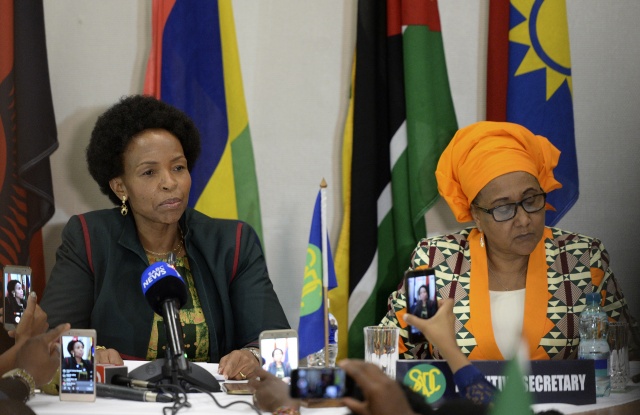 (AFP) - The African Union will allow Zimbabwe's southern neighbors in the SADC regional bloc to mediate in the political crisis there, a senior official told reporters after talks in Washington.

Smail Chergui, the AU commissioner for peace and security, said the union hopes the Zimbabwean military's seizure of control represents "law enforcement efforts" rather than a coup.

He noted that envoys from the Southern African Development Community (SADC) had been able to meet with President Robert Mugabe and said Africa was putting faith in their efforts.

"We see that is rather maybe law enforcement efforts maybe going on, but indeed we remain vigilant, as you know we have our own rules and regulations and our own instruments."

The Zimbabwean officers behind the military action in Harare insist they have not stolen power but are merely acting to purge "criminals" from Mugabe's political entourage.

But others, including AU chairman President Alpha Conde of Guinea have warned the operation has all the hallmarks of a coup d'etat, which could see Zimbabwe kicked out of the body.

Chergui said the AU would remain "vigilant" but "for the time being we hope SADC will succeed in defusing the tensions and promote ... a peaceful solution to what is happening there."

The senior African Union commissioner was speaking after talks in Washington with the State Department on closer cooperation between the African Union and the United States.

His host, US acting assistant secretary for African affairs Don Yamamoto said that on Zimbabwe "we agree totally and completely with our African Union colleagues."

But he also cautioned that whatever government emerges from the crisis must pursue "political, economic, constitutional reform" if it ever hopes to be taken off "numerous sanctions lists."

Africa » Be a reporter: Write and send your article » Subscribe for news alert
Tags: Zimbabwe, politics, Mugabe, AU, US, diplomacy