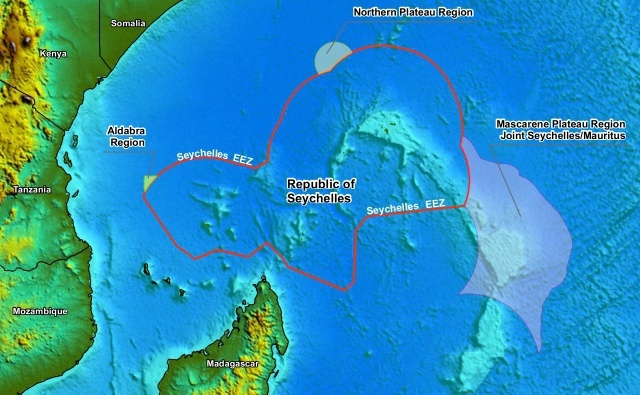 The Mascarene Plateau, situated to the south-east of the Seychelles Exclusive Economic Zone, is jointly managed by Seychelles and Mauritius. (Seychelles News Agency)

(Seychelles News Agency) - Seychellois experts next year will explore the marine eco-system and hydrocarbon deposits over the Mascarene Plateau, a maritime boundary jointly administered by Seychelles and Mauritius, an official said.

“The research will mainly incorporate data collection on the fishery eco-system as well as oil and hydrocarbon exploration,” said Philippe Michaud, the special advisor in the Department of the Blue Economy.

The exploration will be done with the Dr. Fridtjof Nansen, a vessel equipped for advanced and multidisciplinary marine research owned by the Norwegian Organisation for Development Cooperation (NORAD).

The vessel will be sent to the Mascarene Plateau around June next year, and the timeframe of the exploration will depend on the scientists’ programme of research.

The Mascarene Plateau is a large shallow area ranging in depth from 8 to 150 metres in the Indian Ocean situated to the north and east of Madagascar. The shelf extends approximately 2,000 km from the Seychelles in the north to Reunion, a French department, in the south. It covers an area of over 115,000 square kilometres.

The research will be done under the Ecosystem Approach to Fisheries (EAF) Nansen Project being implemented by the Food and Agriculture Organisation in collaboration with the Norwegian Institute of Marine Research.

Local marine and environment scientists will also be part of the exploration.

“They will be able to strengthen their knowledge on sustainable management of fisheries in the face of fishing pressure, climate variability, pollution and other anthropogenic stressors,” said Michaud.

Discussions on the continental shelf of the Mascarene Plateau between Seychelles and Mauritius started in April 2002. The UN adopted the submission in March 2011 and a year later the former Seychelles’ president at the time James Michel, and the former Mauritian Prime Minister Navin Ramgoolam signed treaties for the management of the area.

The impact of climate variability and change will also be another component of the research and will be based on the effect of climate change differs between regions.

There is conflicting information as to the consequences of climate change on coastal upwelling, a crucial element in the biological production of many areas of the African zone and the effect on fisheries, said Michaud.

The Seychelles negotiation with Tanzania over an area of the extended continental shelf near the Aldabra region of the Indian Ocean was not successful.