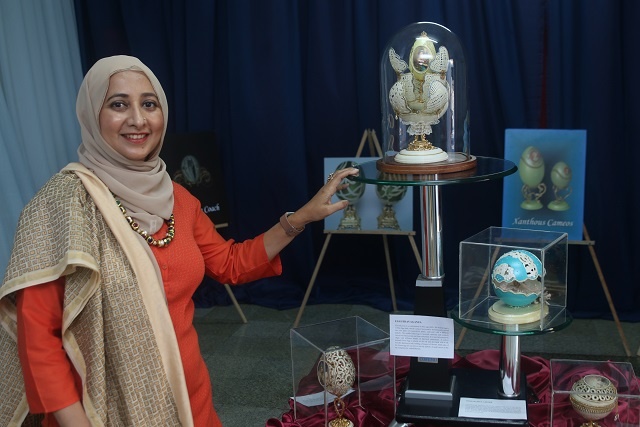 Artworks on display include clocks, jewellery box, carriages as well as a set of teapot and cups (Joe Laurence, Seychelles News Agency)

(Seychelles News Agency) - For the first time in Seychelles, an exhibition of egg art has given members of the public the chance to see different objects and decorations made from eggshells. The fascinating pieces of art are the work of Indian artist Farha Sayeed.

Sayeed’s works are on display in an exposition opened Friday evening at the High Commission of India at Le Chantier – on the outskirts of the capital city of Victoria.

The artist said that the art of egg decoration goes back to early civilizations when eggs were coloured and used as gifts to celebrate the re-birth of life on the earth. Ostrich eggshell with engraved hatched patterns has been found as early as 60,000 years ago at Diepkloof Rock Shelter in South Africa.

The exhibition – titled  Eggstaordinaire - is a side event during this year’s Biennale of Contemporary Arts. Artworks on display include clocks, jewellery box, carriages as well as a set of teapot and cups.

Sayeed started practicing egg art 18 years ago. “My passion for arts started as a child. Over the years I have been involved with silk paintings, charcoal painting, glass painting as well as with aluminium foil art. But egg art fascinations me.”

Ostrich eggs are one of the several eggshells which Sayeed uses for her creation. “Other eggshells which I use are from a variety of birds such as the emu, rhea, goose, turkey, duck, guinea and hen.”

And since her arrival in the Seychelles – a group of islands in the western Indian Ocean – Sayeed has added the sooty tern eggs from Bird Island to her collection.

“The eggs are cleaned and disinfected, hardened using acrylic gesso before it is intricately cut, carved and decorated.”

“Each piece is unique and the inside of the eggshell is beautifully decorated by hand with different silk while the outer layer is decorated using pearls, beads, brocade, velvet, satin and rhinestone chains.”

Sayeed said that this kind of art requires patience, concentration, and imagination with an end product which is fascinating and unique.

“The beauty of this work is that you will never find two pieces alike since it is handmade, as I could not recreate even the same piece,” she said.

Visitors to the exhibition, which closes on Wednesday y afternoon, said that they were surprised at the objects created from eggs.

“I never thought that people could make so much and so different beautiful objects from a simple egg,” said Joe Laurence, a freelance photographer.

Frances Chang Him, a participant of the Biennale, said: “I was amazed by the amount and quality of work done by the artist and the end result is totally amazing.”

During the nearly 20 years that she has been doing egg decorations, Sayeed has had several exhibitions. EGGSPERIENCE" in Copenhagen, Denmark held in 2004,  'EGGCELLENCE' in Jeddah, Saudi Arabia in June 2008, ‘EGGXOTICA’ in New Delhi in India in April 2010, 'EGGSPRESSIONS' in Sana'a, Yemen June 2012).

And prior to moving to Seychelles, "Easter Eggs-travaganza" which was held in Chicago, the United States of America in March 2016.

Sayeed who says she still has a lot to learn from the art form also gives lectures on egg art.

8 global artists, 11 Seychellois to participate in Biennale of Contemporary Arts