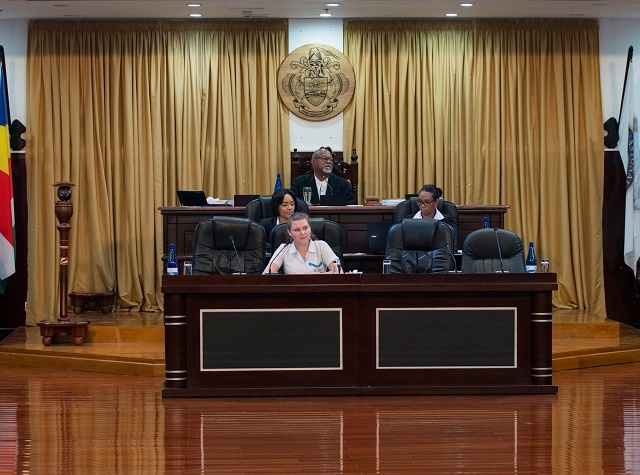 (Seychelles News Agency) - Teenage pregnancy, drug abuse, and sexual abuse are problems affecting children in Seychelles that need to be addressed, a young girl told the National Assembly of Seychelles in a historical address on Monday.

The address of Shayanne Hoareau, 13, to the National Assembly, is the first one done by a child. It coincided with the date the United Nations adopted the Convention on the Rights of the Child, a human rights treaty, on November 20, 1989.

Hoareau said many things have been done in Seychelles to ensure that Seychellois children enjoy the rights in the Convention and become responsible citizens.

“The right to be born, to receive healthcare, live with our parents even when they separate, the right to education, all these are possible thanks to the devotion of our government towards the Convention,” she said.

However, the 13-year-old from Beau Vallon Secondary school in north Mahe said although these rights are enshrined in the Convention, there are still many problems affecting children in Seychelles.

“A study in 2015 showed that 1 in 3 children in S1 (Secondary one) to S5 (Secondary five) have been sexually abused, in most part by members of their families,” said Hoareau.

Children are sexually active at an early age although the age of consent to sex is 15 years, in contrast, to access to contraceptive which is 18 years, and Hoareau asked: “How many little mothers will we have before this law is reviewed?”

On the issue of substances, Hoareau said young people can easily find drugs and as a result, almost 14 percent of children between 11 to 16 years have tested positive for all kinds of substances.

She gave the example of the case of 12-year-old Dylan Rose, who died of suspected substance abuse in an abandoned house in the central district of Mont Buxton on Friday, May 19th.

Hoareau also called on adults to model good behaviour so that children can learn from them and to ask them for their input in problem-solving.

“We have ideas, a lot of ideas, and we can help look for solutions to problems that sometimes adult create,” she said.

Some developments are not taking children into consideration and Hoareau talked about the housing estates which have no playgrounds and “yet, we need to run, sing, play all kinds of games until late if need be.”

“It’s important to remember that young people have dreams and visions for their future. Don’t just look at us as the sources of problems happening in Seychelles. See us as resources that can help resolve problems. We are not only expenses but good investments,” she added.

Hoareau asked the citizens of Seychelles, an archipelago in the western Indian Ocean, to keep treating children with dignity and respect so they can grow up with these values.

She ended her address by saying that ‘We depend on you adult to protect our interest. We promise to work hard at school and to contribute to bringing our country further.”

Hoareau's address to the National Assembly was facilitated by the National Council for Children, the organisation mandated to advocate the rights of the child in Seychelles.

General » Be a reporter: Write and send your article » Subscribe for news alert
Tags: Convention on the Rights of the Child, United Nations, National Assembly