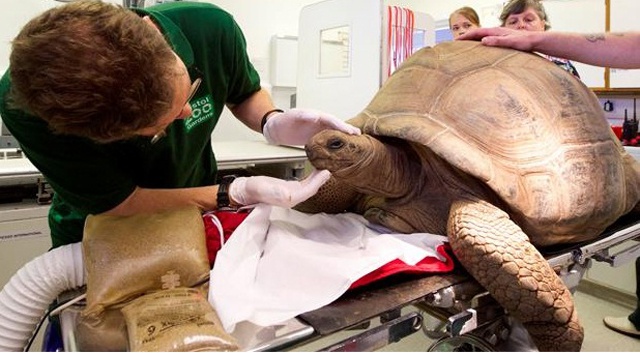 (Seychelles News Agency) - Aldabra giant tortoises usually live to the ripe old age of between 150 and 250 years and can grow up to 250kg, but that doesn’t mean they don’t occasionally need a little tender loving care along the way.

That’s exactly what keepers at the Bristol Zoo in England had to do when they noticed that one of their six resident Aldabra giant tortoises, Helen, was breathing heavily and wheezing – an unusual problem for a 32-year-old giant tortoise originating from the tropical Aldabra atoll in the Seychelles archipelago.

Concerned zoo staff had to work out a plan to get all 90 kilograms of Helen to visit the zoo’s on-site animal clinic for treatment, eventually settling for a mild sedative and getting four people to lift her gently by the shell onto a trolley and wheeling her through the zoo grounds.

The zoo’s veterinarian, Richard Saunders, told the BBC that Helen was given a battery of tests, including blood cultures, nose swabs and X-rays. In the end, the culprit was found – a bacterial nasal infection that was treated with antibiotics and a nasal flush.

“The procedure took about 45 minutes and her recovery was in a lovely warm underfloor-heated sandpit,” said Saunders.

Known for their stubbornness, the thought of putting a giant tortoise on a course of antibiotics was worrisome for her keepers, but it turns out that Helen takes her medicine gladly.

“She's a good patient and is taking her tablets lined up in a stick of celery, which hides the pills and the taste, so she's doing well,” the vet explained.

Today, more than 100,000 Aldabra giant tortoises,outnumbering the human population of 90,000 of the Seychelles archipelago, can be found on the Aldabra Atoll in archipelago, where they originated from, although they are classed as ‘vulnerable’ in the wild.

Aldabra, which is the second largest coral atoll in the world, is an environmentally protected UNESCO World Heritage Site that is uninhabited by humans and extremely isolated.

Helen and her fellow Aldabra giant tortoises at the Bristol Zoo are not the only ones though originating from the Seychelles that are receiving much care in other parts of the world far away from the roots.

In May, SNA learnt about Jonathan, a rare Seychelles Giant Tortoise, thought to be the oldest living animal on the planet, at an estimated age of 182, who spends his days in the British overseas territory of St Helena accompanied by David, Emma, Frederika and Myrtle.