Latin America is world's most violent region for women: UN 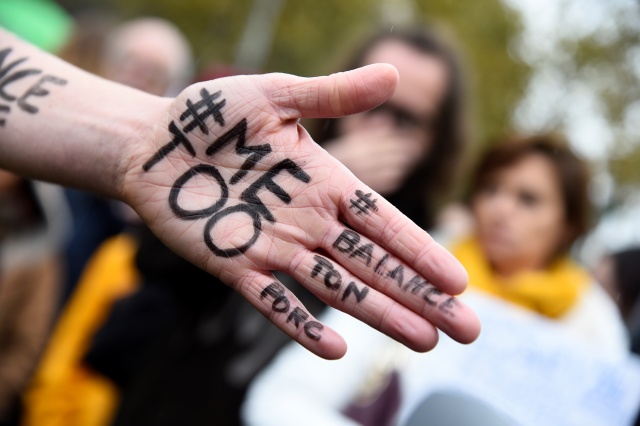 A picture shows the messages "#Me too" and #Balancetonporc ("expose your pig") on the hand of a protester during a gathering against gender-based and sexual violence called by the Effronte-e-s Collective, on the Place de la Republique square in Paris on October 29, 2017. #MeToo hashtag, is the campaign encouraging women to denounce experiences of sexual abuse that has swept across social media in the wake of the wave of allegations targeting Hollywood producer Harvey Weinstein. (Bertrand GUAY / AFP)

(AFP) - Latin America and the Caribbean is the most violent region in the world for women, the United Nations said Wednesday, highlighting Central America and Mexico as particularly dangerous.

In a report presented in Panama, UN Women and the UN Development Programme (UNDP) found assaults on women persisted in the region despite severe laws aimed at curbing the phenomenon.

The rate of sexual violence against women outside of relationships is the highest in the world in the region, and the second-highest for those who are in, or were in, a couple, the report stated.

Three of the 10 countries with the highest rates of rape of women and girls were in the Caribbean, it said.

Femicide -- the killing of women -- occurred on a "devastating scale" in Central America, it said, explaining that two out three women murdered died because of their gender.

"In some countries it has become a severe crisis. In the Northern Triangle (Honduras, El Salvador and Guatemala) and Mexico the problem of femicide and violence against women has reached epidemic levels, in many cases with links to organized crime," Piza-Lopez said.

Central America's Northern Triangle is considered the most dangerous area in the world outside war zones, mainly because of rampant gangs and drug cartels.

The UN report noted that 24 of the 33 countries in Latin America and the Caribbean have laws against domestic violence, but only nine of them have passed legislation that tackles a range of forms of other violence against women in public or private.

It also said that 16 of the countries had femicide on the books, and a few punished newer types of crimes, such as cybercrime, political violence, or acid attacks.

Despite those advances, though, the "plague" of violence continues to be a threat to human rights, public health and public safety, it said.

The UN recommended strengthening institutions and policies in the region, and allocating resources to empower women. It also advised that "patriarchal" cultural norms that maintain gender inequality needed to be addressed.