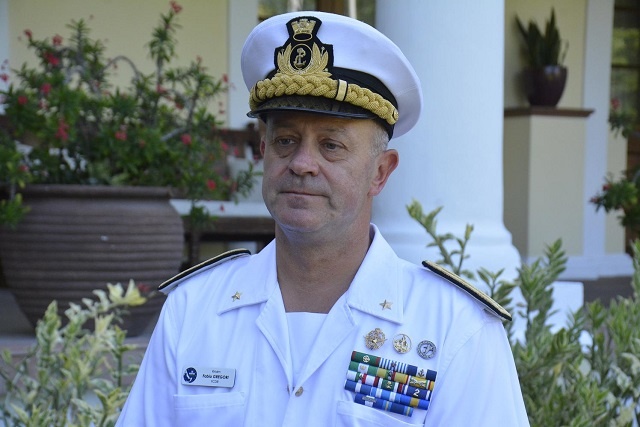 (Seychelles News Agency) - The support of Seychelles is crucial in deterring future pirate attacks in the region, said a top official of the European Union Naval Force (EU NAVFOR) delegation during a meeting with the President of Seychelles on Friday.

The delegation made up of Rear Admiral Fabio Gregori, other EU NAVFOR officials and the Italian Consul Claudio Izzi, met with President Danny Faure at the State House in Victoria.

Faure told the group that the quick action of the EU NAVFOR in a recent operation in which six suspected Somali pirates were captured has sent a strong message.

The six suspected Somali pirates were apprehended by an Italian navy frigate, ITS Virginio Fasan after they attacked a Seychelles-flagged 52,000-tonne container ship and a fishing vessel last week. The incident took place over a 24-hour period from Friday, Nov. 18 to Saturday, Nov. 19.

The suspects were transferred to the authorities in Seychelles on Thursday for possible trial based on an agreement with the European Naval Force Operation Atalanta.

“This kind of immediate action is very important in the mission to counter piracy in the Indian Ocean. Without this we would have been obliged to release them, thus, sending the wrong message,” said Gregori.

Faure told the delegation that Seychelles, an archipelago in the western Indian Ocean, is grateful for the work the EU NAVFOR has been doing to assist the island nation.

“Your presence over the years when the scourge of piracy took a toll on the country has been invaluable, and once again your quick action in the recent operation has sent a strong message. We look forward to further consolidating our strong partnership,” said the president.

The scourge of piracy has been plaguing the Indian Ocean since 2005. Seychelles, which lies to the east of Somalia, has been at the forefront of the fight against piracy that was affecting its tourism and fisheries industries, the top two pillars of its economy.

Gregori said, “Piracy is affecting free trade. It is true that we had observed a decline in their operation at sea for a while now, but we should always be on the lookout. Their recent attacks show that they are still being funded and waiting for the right time to attack.”

Faure and Gregori also discussed the present maritime security exercises being conducted and plans to intensify and expand the orientation of surveillance in the region to ensure the security of surrounding waters.

The EU Naval Force is in Seychelles for joint maritime security interactions with the Seychelles People Defence Forces and other maritime forces.