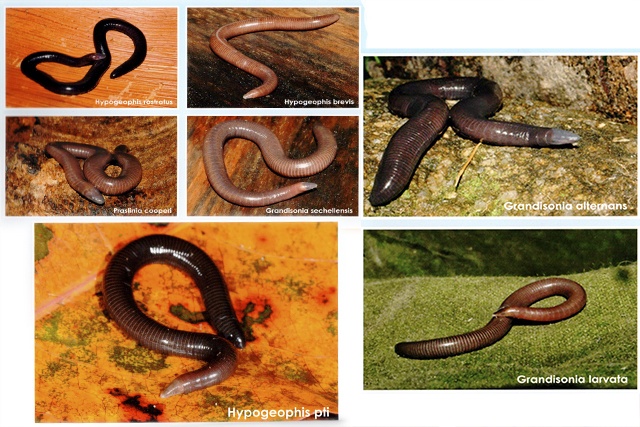 (Seychelles News Agency) - Renowned for its natural beauty, rich biodiversity and unique flora and fauna, the Seychelles islands are also considered a champion for the environment.

A leader in conservation and preservation, the group of islands in the western Indian Ocean has numerous initiatives and programmes to protect and raise awareness on species endemic to the islands.

An exhibition was recently opened at the Natural History Museum to bring more awareness on the protection of the Seychelles caecilian, limbless burrowing amphibians found in tropical regions that resemble earthworms.

This week SNA brings you the seven species of caecilians endemic to the Seychelles.

The Frigate Island caecilian - Hypogeophis rostratus - is the most encountered of the caecilian species. It is found on ten granitic islands, namely Mahé,Praslin, Silhouette, Ste. Anne, Curieuse, La Digue, Cerf, Felicite, Grande and Petite Soeur as well as on Frégate.

Hypogeophis brevis is a species of caecilian formerly included in the genus Grandisonia and found on the islands of Mahé and Silhouette. It is known only from two specimens collected on Mahé in 1910 and more recently collected from Silhouette. The species is now listed as endangered by IUCN.

Grandisonia alternans is a species in the family Indotyphlidae, endemic to the islands of Mahé, Praslin, Silhouette, Felicite, Frégate, and La Digue. They are found from sea level up to about 600m.

Praslin's caecilian, Praslinia cooperi, is a species of caecilian in the family Indotyphlidae. It is also known as the cooper’s black caecilian and can be found only Mahé and Silhouette. An old reported sighting on its namesake Praslin is not known to be correct. Because it is relatively rare it has been classified as endangered on the IUCN red list.

This species is found on the three largest islands of the Seychelles – Mahe, Praslin and Silhouette. The Grandisonia Seychellensis can be found from sea level up to 600m.

This new species, recently discovered on Praslin, is named Hypogeophis pti, where 'pti' means small in Seychellois creole. The species is notably smaller than any other Caecilian from the island nation. The species was found at three locations, around the village of Ma Katrine, Fond Peper and Glacis Noir in the Praslin National Park.