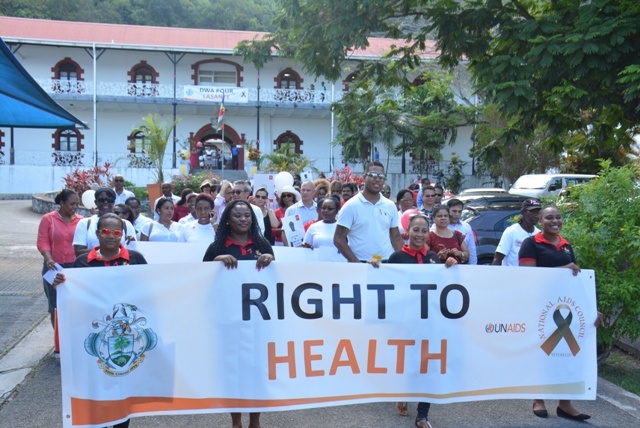 (Seychelles News Agency) - Seychelles has recorded 95 new HIV/AIDS cases this year, and the Ministry of Health says it is working to fight the spread of the virus by targeting drug-use transmissions.

The 95 cases so far this year are more than the 63 cases reported last year but fewer than the 103 reported in 2015. One positive development is that the number of HIV pregnancies -- where the mother passes the virus to a newborn child -- plummeted this year compared with 2016.

In commemoration of World AIDS Day -- Friday, December 1 -- various activities were being organised in Seychelles, including a solidarity march.

Out of the 95 new cases, there are 72 men and 23 women and the main mode of transmission is by intravenous drug use, an issue officials are trying to tackle.

“We have introduced better testing services for prison, improved the availability of harm reduction services such as Methadone and needle exchange, and we are now able to better access people who inject drugs,” said Anne Gabriel, the chief executive of the National Aids Council.

According to the epidemiology report of 2012 to 2016, 30 percent of the cases are believed to be drug users who are also co-infected with Hepatitis B and C.  Seychelles, with a population of 93,000, has 895 HIV infected inhabitants and 314 living with AIDS.

HIV -- human immunodeficiency virus -- attacks the body’s natural defence system and as a result, the body cannot fight infection and disease. AIDS, which stands for acquired immune deficiency syndrome, is the final stage of infection with HIV. Not everyone with HIV develops AIDS.

With the increasing number of drug users in the island nation, the fight against HIV/AIDS is becoming even more complicated. The AIDS Council says it intends to work in partnership with the newly set up drug reduction agency to offer more tests and treatments.

“We will get them (drug users) tested and started on HIV treatment, train peer educators to support those on treatment and advocate for Hepatitis treatment for all those who are infected, “ Gabriel said.

According to the Ministry of Health’s epidemiology report, the most affected group is between 25 to 35 years. The number of AIDS-related deaths more than doubled this year compared to three deaths last year.

Seychelles, an archipelago in the western Indian Ocean, is still putting more emphasis on the prevention of pregnant mother passing on the infection to their child. Only one case was reported this year. In 2016 there were 14 HIV positive pregnancies.

A user who wanted to remain anonymous told SNA that, “I don’t know my status, I have always been afraid of doing an HIV test. I don’t like going to the doctor because I always feel discriminated when I do.”

The 20-year-old male said, “When the pain is too strong I just go to a pharmacy.”

There are several not-for-profit organisations already working with both drug users and HIV/AIDS infected individuals.

The chair of the HIV AIDS Support Organisation (HASO) Justin Freminot says that both types of clients are coming to his office and they provide counselling services.

The organisation has joined other groups in a bid to remove legal barriers through discussions and one group they are meeting with our parliamentarians. Discussions focus on the existing laws and policies that make it difficult for infected people to get treatment.

One main legal barrier is the provision of services such as the needle exchange programme which is done for a few hours per day and is given at the Seychelles Hospital only.

Freminot said, “We are advocating that it moves into other districts because someone from Port Glaud (a district in the west of Mahe) who needs a syringe may arrive late and miss the exchange hours and find himself making a useless trip.”

World AIDS Day, which started in  1988, is an opportunity for people worldwide to unite in the fight against HIV, to show support for people living with HIV, and to commemorate those who have died from an AIDS-related illness.