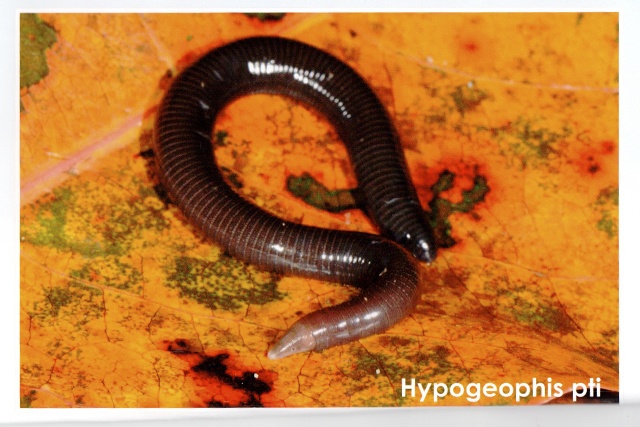 The new species was discovered as part of the UK government’s Darwin Initiative-funded project that ran from 2012-2015. (Salifa Karapetyan, Seychelles News Agency)

(Seychelles News Agency) - The number of endemic caecilians in the country has increased from six to seven as researchers confirmed a new species in the 115-island archipelago in the western Indian Ocean.

The Hypogeophis pti, locally called petite Praslin caecilian, is believed to be one of the world’s smallest caecilians, measuring no more than 120 millimetres in length. The word ‘pti’ is the Creole spelling of the French ‘petite’ for small.

A caecilian is a limbless, serpentine species that breathes with its skin and lives in moist ground. They are a burrowing amphibian that resemble earthworms found in tropical regions.

It closely resembles the Hypogeophis brevis, another endemic species of caecilian in Seychelles, in being short and long-snouted. They differ by having less anteriorly positioned tentacles - petite Praslin caecilian’s tentacles are nearer to its eyes. It also has fewer vertebrae than any caecilian known to science.

As its local name suggests, the newly discovered species can be found only on Praslin, the second biggest island of Seychelles. More specifically, it is found in a small area in the centre of the island – in two national parks, namely Fond Peper and Glacis Noir, and in Ma Katrine.

“This new species has not been encountered on other islands during hundreds of hours of dedicated caecilian surveys between 1976 and 2017,” said Simon Maddock, a conservation biologist at the University of Wolverhampton on the university’s website.

Maddock was part of the team of scientists from Seychelles, the United States and the United Kingdom who found the new caecilian. Between 2013 and 2014, the team collected 14 type specimens.

The new species was discovered as part of the UK government’s Darwin Initiative-funded project that ran from 2012-2015. The aims of the project were to improve knowledge, management and conservation of the 12 Evolutionary Distinct Globally Endangered (EDGE) species endemic to Seychelles.

The group of scientists believes that since Hypogeophis pti is found only on Praslin, the species is highly susceptible to the threat of extinction.

“The extinction of any Seychelles amphibian would be a major loss to global biodiversity,” said Maddock.

To confirm a new discovery, specimens need to be researched - literature reading, studies, and write-ups need to be done. This can be carried out for several years resulting in the four elapsed years before the scientific article about the caecilian was published.

Caecilians are believed to be common in Seychelles but as they live underground, they are not widely known to the people.