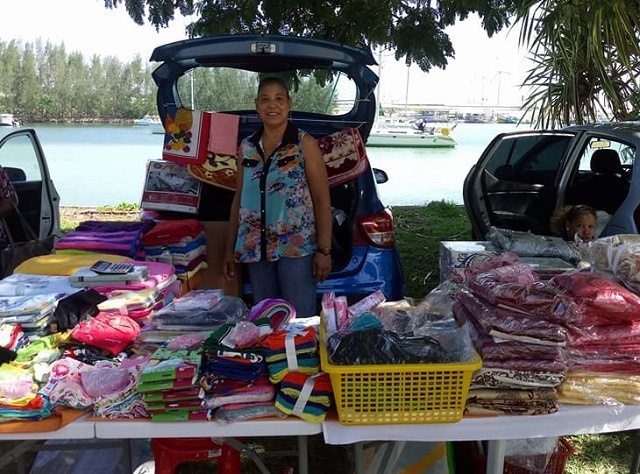 The Seychelles Small Enterprise Promotion Agency is using the activity to boost entrepreneurship as vendors have another way of selling their goods. (SEnPa)

(Seychelles News Agency) - A car boot sale is set to become a calendar event for the Seychelles Small Enterprise Promotion Agency (SEnPA) after a large crowd turned up for the first one organised recently, an Agency official said Monday.

“We have been very surprised by the outcome and turnout and even before the event a lot of people had called us to book for a place,” said Penny Belmont the chief executive of the Agency.

Belmont said that the Agency recorded more than 30 cars participating in the event and they were all selling different items.

She added that the Agency plans to organise more car boot sales in future and on a bigger scale.

Car boot sales, also known as boot fairs, are outdoors sales at which people sell unwanted possession from the boots of their cars.

Belmont said this form of activity is becoming popular in other cities and towns and Seychelles, an archipelago in the western Indian Ocean, is moving in that direction with the aim of boosting entrepreneurship, innovation and recycling.

“It is important for us to come up with innovative ways rather than just constructing buildings to house vendors,” said the chief executive.

The car boot sale “is a way of attracting a large group of people in one place to recycle useful but unwanted domestic items that otherwise might have been thrown away,” she said.

SNA spoke to one of the participants, Jude Kilindo, who said that this kind of event changes the shopping habits of the people.

“We used to have people going to supermarkets and shops to buy their goods, but now we have a more diverse way of shopping,” said Kilindo.

A boot car sale buyer, Rebecca Gertrude, said, “It is cool and out in the open and you feel freer to bargain with vendors.”

The Seychelles Small Enterprise Promotion Agency is using the activity to boost entrepreneurship as vendors have another way of selling their goods.

The Agency was established in August 2004 following the closure of the Seychelles Industrial Development Corporation (SIDEC). It has the mandate for implementing the government’s policy on craft and cottage industries.

Pedestrian-friendly waterfront project for Seychellois to begin next year