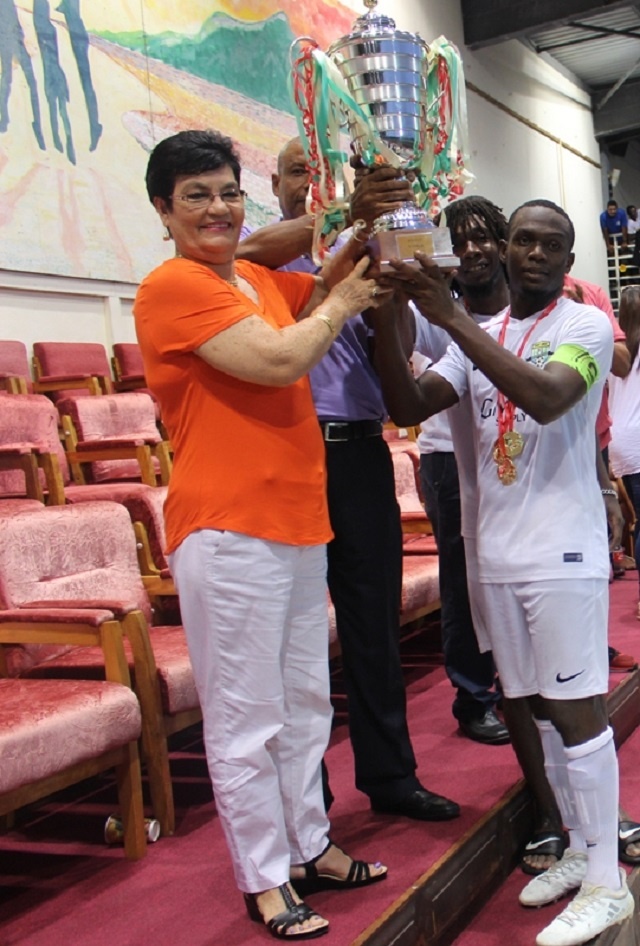 (Seychelles News Agency) - The St. Louis football club of Seychelles will be participating in the Confederation of African Football (CAF) club competitions in 2018 after winning the First Division league and the Federation Cup.

The team based in the central district of St. Louis had already ensured their league title in November and made it double last weekend winning the Seychelles Football Federation Cup. In the final match, St. Louis defeated Anse Reunion from La Digue, the third most populated island, 3-1 in the final.

For manager Davis Khan the double title is something the team has been trying to achieve for a long time. The last time St Louis won the league title was in 1994.

“I am very happy. I think this is a big victory for us. After almost 23 years of not winning a title, this one will stay in the minds of the players for a long time because they have revived the St. Louis football team,” said the manager.

He made special mention of the coach Nigel Freminot and the coaching panel saying, “I would like to thank them for an excellent job.”

Khan said that after the double, the team was sad to lose the coach and panel who resigned after a meeting earlier this week.

“In the meeting, we informed the group that the coach does not have a license which is the requirement needed for the African competition.”

The St. Louis team is now waiting for the draw to know who will be their opponent for the 2018 Total CAF Champions League. And they need a new coach.

“We will have to find another coach with a license that meets the required standard.  We have also not yet decided who we will be bringing to the African competition but hope to do so next week,” said Khan.

The other Seychellois team who qualified for the CAF club competition is Anse Reunion. The team from La Digue will be competing in the Confederation Cup.

Neither team from Seychelles, a group of 115 islands in the western Indian Ocean, progressed to the next round.  Cote d’Or lost 5-0 on aggregate against St. George and St. Michel went out 2-0 against Al Hilal of Sudan.