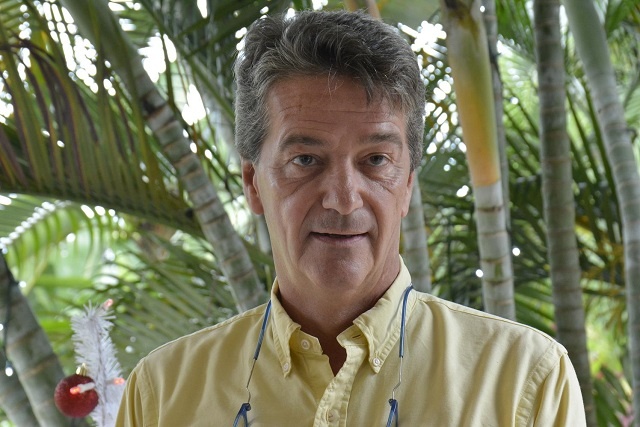 The owner of ISPC Alfred said that he received a positive response from President Danny Faure, who congratulated him for taking this bold step to venture in agriculture, which will further ensure food security for the population.  (Joena Meme, Seychelles News Agency)

(Seychelles News Agency) - The chief executive of the International Sales and Promotion Company (ISPC) is the winner of the Seychelles Entrepreneur of the Year 2017 award.

Alfred Fourcroy who was presented the award on Saturday at the annual Business Awards ceremony met with the Seychelles' President Danny Faure on Tuesday at State House, Victoria.

Fourcroy told the press that "our discussion today was centered on our main ongoing project, which is the setting up of a farm in Val d'Andorre, (a sub-district of Baie Lazare), that will produce various crops. We hope to start production by the end of March next year."

The owner of ISPC -- a Belgian company -- added that he received a positive response from President Danny Faure, who congratulated him for taking this bold step to venture in agriculture, which will further ensure food security for the population.

Seychelles, an archipelago in the western Indian Ocean, has 93,000 inhabitants.

Fourcroy set up the Seychelles branch of ISPC -- a Belgian company -- in December 2006. The company which is located in the central district of Roche Caiman provides wholesale food products to restaurants, hotels, ships and individuals.

Speaking to SNA at the ceremony, Fourcroy said he won the award because he is an entrepreneur with a vision and ambition.

“Everywhere I have been I have had the willingness to bring something innovative and contribute something good in the community I am operating in,” said Fourcroy.

He said that he has had his fair share of challenges and that making critical decisions as a businessman has not always been easy.

ISPC is also one of the companies which have found a way to ensure that by-catch from the foreign purse seiners fishing in the Seychelles' Exclusive Economic Zone is put to good use. The company makes available on the local market a whole range of value-added fish products targeting species which are not commonly consumed by the Seychellois people.

Fourcroy said that his big business venture for next year will be in agriculture; he has set up a farm at Anse Royale, located in the south of the main island Mahe.

The Young Entrepreneur of the Year award went to Danny D’souza, who has set up clothing and souvenir shops as well as a spa.

As he was not present at the award ceremony, SNA spoke to his wife, Amelie D’souza, who described his husband as a timid but ambitious person.

Amelie D’souza said that this award is due to the charities that they do for the community and for the recognition they give to their workers.

The Business Awards, which is organised every year since 2013, aims at acknowledging entrepreneurship and the hard work that businessmen do in Seychelles.

The chair of the Seychelles Chamber of Commerce and Industry Oliver Bastienne said that it is important for the organisation to continue hosting this type of event as it helps to boost innovation among business peers.

“As businesses, we need to work together if we want to prosper,” said Bastienne. He added that “as the chairman of SCCI, I see the necessity to work more closely with the government and legislative body to come up with policies that will promote the ease of doing business.”

Business » Be a reporter: Write and send your article » Subscribe for news alert
Tags: International Sales and Promotion Company, Entrepreneur of the Year, Seychelles Chamber of Commerce and Industry

Need to call a lot of people? New call centre opens in Seychelles