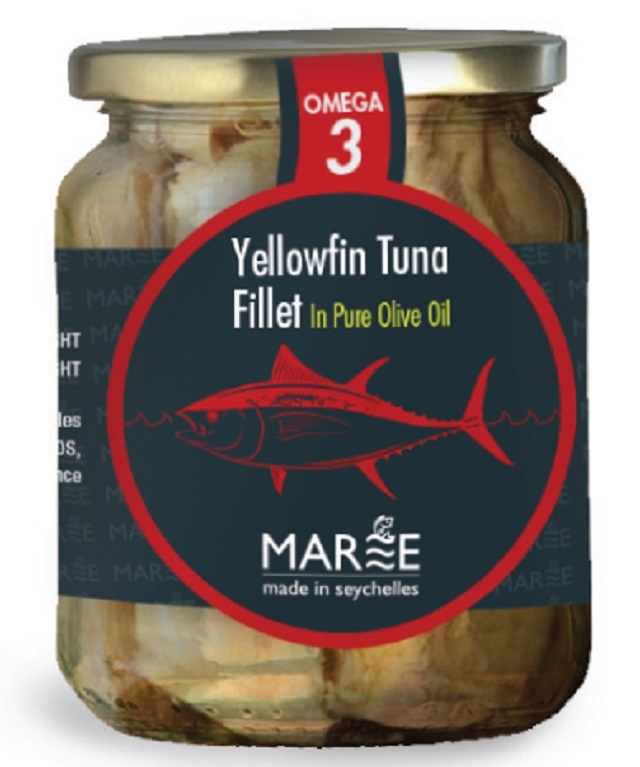 (Seychelles News Agency) - A new range of fish-based products made by a recently opened company is available in hotels and shops in Seychelles.

The new products from Oceanaire Seafoods include jarred tuna, sausages, fish balls, fish burgers and smoked fish. The products will be available in a wider selection of shops in February.

“Already available on the market is smoked marlin which we traditionally use. Marlin is a vulnerable species so we have to be more sustainable and use other species such as dorado, tuna and mackerel. The trimmings and offcuts are used for other products such as sausages, burgers and fish balls,” said Rondolph Payet, the executive director of Oceanaire Seafoods.

The company, which is based at the Providence Industrial Estate on the eastern coast of the main island of Mahe, is diversifying the traditional fish species used to make specific products.

Opened in September, Oceanaire Seafoods is a partnership between Seychellois entrepreneur Rondolph Payet and Amirante Fisheries, a company which opened in 2014 sp3cialising in exports and trading of bycatch species and small tunas. The focus of the Oceanaire Seafoods is to use by-catch and tuna, including others fished by both the Industrial and domestic sector and transform into value-added products.

The company is now producing about 800kg per day and a maximum of 3 tonnes per week to supply the local shops and hotels.

Payet said that their products are also 100 percent pure fish with no added fat, no colouring or additives which makes them healthier compared to imported products. The company is manufacturing in the most sustainable way possible which is the reason for jarred tuna, as the container is reusable. In the future, the company will switch to solar panels as a means of cutting high electricity costs.

With the focus on the development of the blue economy in Seychelles, an archipelago in the western Indian Ocean, local companies are going into seafood products using mostly fish.

Payet said that the market is a difficult one to penetrate and the main factors are the lack of education on the value-added sector and the lack of people with the technical know-how.

“The government needs to put the technical persons in this sub-sector if is going to be successful and more beyond just manufacturing steaks and fillets.They have a unit for the development of value-added products but the uptake is slow,” said Payet.

Oceanaire Seafoods plans to offer its products to other islands in Seychelles in the near future.