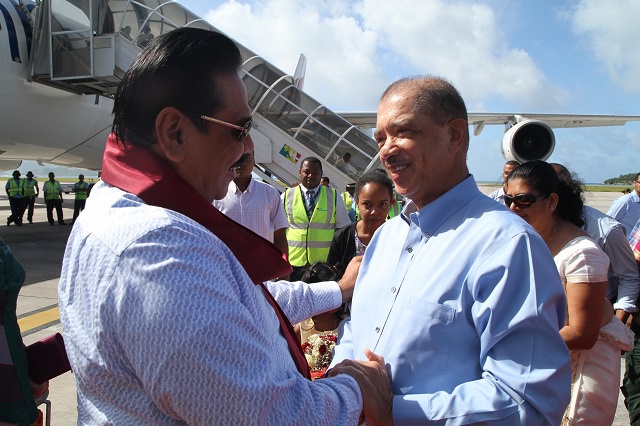 (Seychelles News Agency) - Sri Lankan President Mahinda Rajapaksa has arrived in the Seychelles this afternoon on his second visit to the archipelago.

Seychelles President James Michel was at the Seychelles’ International Airport at Pointe Larue, to welcome the head of state and the Sri Lankan First Lady Shiranthi Rajapaksa, who disembarked from a chartered SriLankan Airlines flight at 1430 local time.

This is Rajapaksa’s second visit to the Indian Ocean archipelago following his state visit in June last year.

The Seychelles Ministry of Foreign Affairs has said that the visit “cements the close relations between the two countries and demonstrates Sri Lanka’s active engagement with Seychelles as a resolute partner in bilateral relations.”

During his three day official visit to the Indian Ocean archipelago Rajapaksa will hold talks with his Seychellois counterpart and together they will lead bilateral discussions between officials of the two countries.

The diplomatic office will be based in the Capital City building in the centre of the Seychelles capital of Victoria, the same building which houses the Sri Lankan Bank of Ceylon, which started operating in January this year.

The accreditation of the first resident Sri Lankan High Commissioner to Seychelles and the opening of its first diplomatic office in the archipelago comes after almost 26 years of diplomatic relations between Seychelles and Sri Lanka.

Sri Lanka’s move to set up a mission in Seychelles also follows recent state visits by the presidents of the two states.

During President Michel’s visit to Sri Lanka in 2012, the heads of state of the two Commonwealth member nations witnessed the signing of agreements in various fields such as health, labour and education.

Since then, the agreements have started to materialize for example there has been increased cooperation in fisheries as well as the opening of air access, with Sri Lanka’s airline Mihin Lanka now flying to Seychelles.