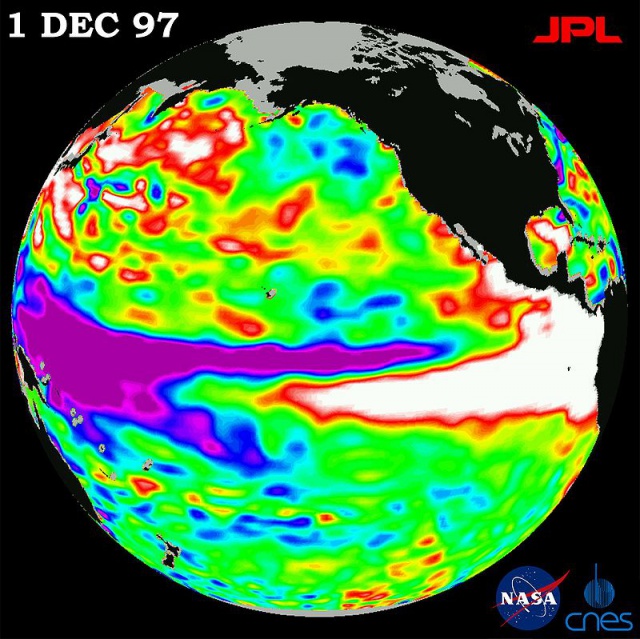 The 1997 El Niño observed by TOPEX/Poseidon. The white areas off the tropical coasts of South and North America indicate the pool of warm water(NASA,Wikipedia)

(Seychelles News Agency) - Scientists at the World Meteorological Organisation (WMO) have said that it is highly likely that the weather phenomenon known as El Niño will occur in the next few months, warning that it could disrupt normal weather patterns all over the world.

According to a statement released on Thursday by the WMO, there is a 60 percent chance of El Niño conditions occurring between June and August, increasing to 75-80 percent for the October to December period this year. Based on their prediction, governments all over the world have begun to prepare for El Niño’s arrival.

The US National Oceanic and Atmospheric Administration and the Japan Meteorological Agency’s Tokyo Climate Centre both reported that average global temperatures recorded in the month of May were the highest on record.

The Director of the Seychelles' National Meteorological Services, Selvan Pillay, told SNA that they had received the WMO report yesterday but that it was too early to tell how Seychelles could be affected.

“We will be reviewing the report,” he said. “All the relevant agencies will have to convene so that we can study it together and only then we will be able to come out with a clear statement to say what effects the phenomenon could have on Seychelles.”

The El Niño Southern Oscillation (ENSO) is a periodic shift of the ocean’s atmospheric conditions in the tropical Pacific that has an impact on weather patterns all over the world. The phenomenon happens every three to seven years and is associated with floods, droughts, and other global disturbances. The last El Niño was in 2009.

Peruvian fishermen originally coined the term El Niño, meaning “the boy (Christ) child”, after they noticed that every few years around Christmas, there were almost no fish to be found in the unusually warm waters.

Between 1997 and 1998, a ‘super’ El Niño, the biggest ENSO event ever seen, caused disruptive weather patterns costing $33 billion in damages and claiming an estimated 23,000 deaths worldwide.

Seawater temperatures rose by 2° to 3°C for a period of a few months, and the sensitive island ecosystems of the Seychelles islands in the Western Indian Ocean were badly affected, with up to 90 percent of the coral reefs were bleached as a result of this temperature rise.

The coral reef bleaching left stretches of pristine coast vulnerable to erosion and coastal communities were more vulnerable to landslides and flooding.

WMO’s Secretary-General, Michel Jarraud, says their improved understanding of the El Niño pattern has enabled governments to adequately prepare for the impact ahead of time.

“Advance warning has given governments around the world time to make contingency plans for the impact of this year’s expected El Niño on the agriculture, water management, health and other climate-sensitive sectors,” he said. “We remain vulnerable to this force of nature but we can protect ourselves by being better prepared.”