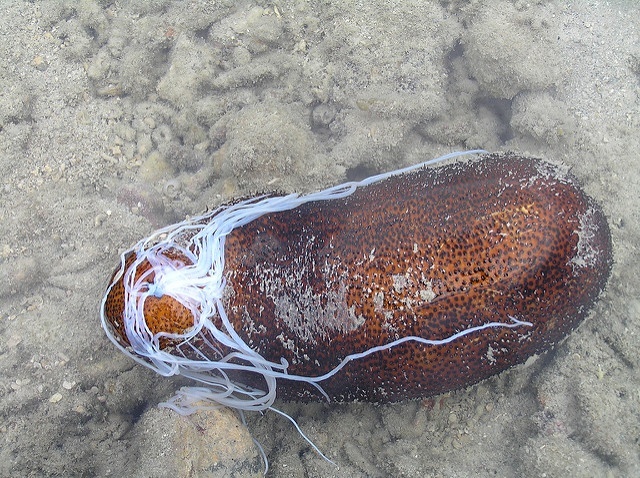 The fishing season of the sea cucumber will be reduced to eight months as of next year. (Pierre Pouliquin/flickr) Photo License: CC BY-NC 2.0

(Seychelles News Agency) - New measures will be put in place next year to regulate the collection of three types of commercial sea cucumber species in the waters of Seychelles.

The deputy chief executive of the Seychelles Fishing Authority (SFA), Calvin Gerry, said, the “new management measure will be introduced to ensure sustainability and long-term viability of the sea cucumber species since it is no longer a virgin stock.”

“This will be reviewed after three consecutive fishing seasons. We will monitor the quota and also put in place a review mechanism for non-performing licensees who are not utilising their quota,” says Gerry.

The species is the most regulated of all fisheries in Seychelles, an archipelago in the western Indian Ocean, with fishing license conditions containing more than 30 articles. Due to exploitation for around 20 years, the stock has dwindled.

The Chairman of the Association of Seychelles Sea Cucumber Industry, Paul Morin, said that symptoms of stock depletion have been detected during their last scientific analysis and it is prudent to enforce new regulation as a precautionary measure.

“The three species form the bulk of our harvest. I would say above 95 percent of our catch over the last 15 years. Therefore, if now we have been allowed to target only these 3 main species, it would have minimal impact on our traditional overall catch,” says Morin.

Fisheries is the second largest contributor to the economy of Seychelles and more than 99 percent of the sea cucumber harvested is exported to overseas market.

“The limitation in quota will not affect the revenue collected as in previous years as the revenue gain is measured in weight,” says Morin. “However, there are certain vessels that have been producing well that may be affected because their respective quota limit might be below their 2016 catch.”

Morin said there are two reasons for the limit on the number of months for the sea cucumber fishing season.

“Sea cucumber divers are classified as commercial divers and after having stressed the body out for 8-9 months it is prudent that the body is allowed a break to properly recuperate. As our traditional management controls were based more on input control, this has allowed the stock the chance to replenish.”

A local fisherman, Terry Jeanne, who has been working in the industry for over 15 years, said that there should be more consultation with fisherman before a new regulation is put in place.

Jeanne nevertheless agreed that if fishermen “want to ensure that there is a catch tomorrow, we need to regulate the collection somehow and prevent overfishing of the species.”

While at sea for several weeks, Jeanne said he noticed that there is a depletion in the stock of sea cucumbers as he had to go in the deeper water to get his catch.

He suggested that in the future other types of the species should be allowed to be collected to let the ones that are being fished to replenish.