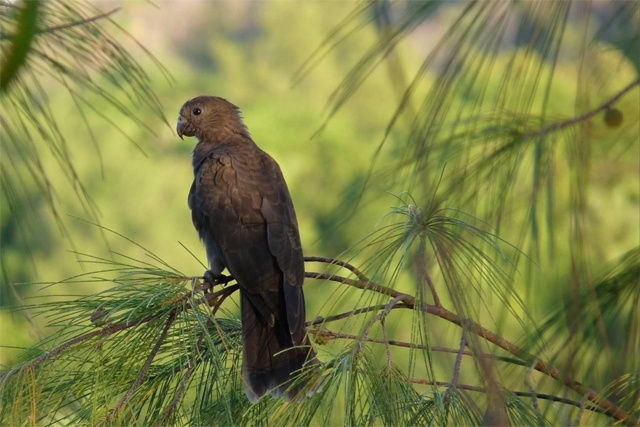 The species is monitored closely during its breeding and hatchings season, usually December to April. (Seychelles Islands Foundation)

(Seychelles News Agency) - The breeding season of the endemic black parrot of Seychelles has started, and as is customary every year, the Seychelles Islands Foundation research team has begun its monitoring exercise.

The black parrot, which is really grayish brown in colour, is listed as vulnerable on the International Union for the Conservation of Nature’s (IUCN) red list due to its small population. According to a 2013 estimate, there are 520-900 black parrots on Praslin.

Every year, the species is monitored closely during its breeding and hatchings season, usually December to April, by the Seychelles Islands Foundation (SIF), a public trust which manages the unique endemic palm forest reserve of the Vallée de Mai on Praslin Island.

The SIF research team painstakingly searches for black parrot nests and monitors them on a weekly basis throughout the season to count the number of eggs produced and monitor the hatching and fledgling stages.

At the start of the season, the team is busy checking all potential nest sites in the known core breeding areas of Praslin Nature Reserve, Fond Ferdinand and Vallee de Mai, a UNESCO World Heritage Site on the second-most populated island of Praslin.

Speaking to SNA, Julia Kovacs, a member of the black parrot team said this year a total of 73 cavities in tree where nesting is done have been checked and one breeding call has been heard so far.

“It was heard at Fond Pepper and later at the same location the team spotted a female parrot inside a cavity in an albizia tree, observing her going in and out of the cavity, which suggests that she is prospecting the nest,” said Kovacs.

During the breeding season, the female birds attract the males to their nesting cavity by their breeding. The black parrots also change their plumage and beak colour, and females have their own individual calls.

Explaining the method of monitoring, the research team said the nesting cavities are accessed by using ladders attached with four ropes to neighbouring live trees. This prevents damage to the cavities as they can easily collapse.

“A camera is attached to a telescopic pole. The camera is lowered into the nest to observe and monitor any activity,” said Terance Payet, the black parrot team leader.

Threatened by invasive bird species such as the Indian Mynah, black parrot chicks are in constant danger from other aggressive birds, feral cats, rats and even invasive ants.

With the new Inva’Ziles project taking place in tandem with the black parrot breeding season, the team members hope this will give them a greater understanding of the threats to black parrots, and can, therefore, explore new methods to mitigate them.

During the monitoring, the white-black parrot has also been spotted again and the team was able to observe the bird close-up perched on a cable and then in a papaya tree.

“We still hope to catch the white-black parrot for genetic analysis. An unusual black parrot was also spotted on Praslin that appeared to have some brown feathers, the team are on the lookout for the bird, nicknamed Caramel,” said Kovacs.