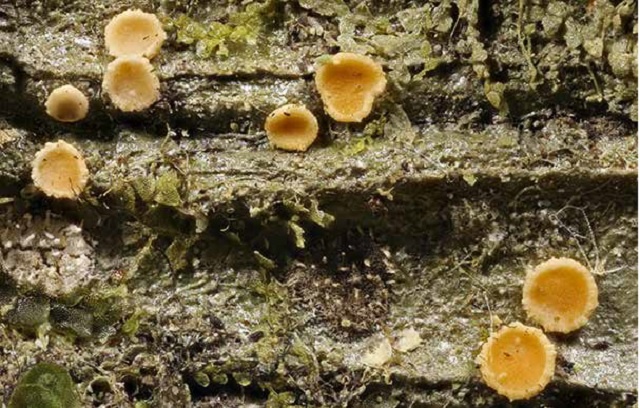 Sixteen new species of lichens have been discovered in Seychelles, and three have been named after Seychellois conservationists.

This rich finding in an island nation with unique biodiversity and ecosystems comes after research by Paul Diederich from Luxembourg. Diederich is a lichenologist, specialising in the studies of this moss type organism.

“I was able to collect a total of 323 specimens, amongst which 16 species collected were described as new. Three - Coenogonium beaverae, Graphis lindsayana and Porina morelii - are named after Seychellois Katy Beaver, Lindsay Chong Seng, and Charles Morel respectively," Diederich said.

A lichen is actually two organisms functioning as a single, stable unit. Lichens comprise of a fungus living in a mutual relationship with an alga. There are about 17,000 species of lichen worldwide.

These species grow on plants, rocks, soil and other surfaces, and in the case of Seychelles - a group of 115 islands in the western Indian Ocean – they are commonly found on coconut trees.

“An additional 49 species were new records for Seychelles, of which 29 were even new to Africa. All in all, this brings the Seychelles lichen flora to over 500 recorded species,” said Diederich after the findings were published recently.

The researcher said that the study of lichens in Seychelles is relatively recent compared with many taxonomic groups.  There are many new things to be learned about this important but often neglected group.

“Seychelles is still poorly known, and that the help of foreign taxonomists is required until there is a trained Seychellois lichenologist. Therefore it is important that visiting lichenologists share their knowledge with local biologists.”

Diederich did his field research in 2015 and his researchers were done on the three main islands of Mahe, Praslin, La Digue as well as on Thérèse island. The lichen samples were collected at the Jardin du Roi at Anse Royale, at Morne Blanc, at Glacis Noir on Praslin and in the Veuve Reserve on La Digue. All samples can be found at the Seychelles National Herbarium.

Diederich said that more research is needed as he feels that there may be other specimens not yet discovered. He adds that this is something that locals should venture into.

“What is urgently needed in Seychelles is for young people to get interested in lichens, youth who will learn to know the different species and build up a much larger reference collection in their national herbarium.”

The Seychellois lichen namesakes -- Katy Beaver and Lindsay Chong-Seng -- are members of the Plant Conservation Action Group with Charles Morel also the curator of the Seychelles National Herbarium.

All three have long been associated with management and protection of biodiversity of the islands. All three have said that they are honoured with such recognition of their hard work, dedication, and commitment.

Charles Morel said “I feel very happy and honoured to have a plant species named after me. After having worked with plants for almost 25 years in different related aspects, species and habitat survey, plant collection, training people in plant identification, habitat restoration and plant conservation, this is just reward. I also wish there were more young people showing interests in the natural sciences.”

“It is an honour to have a new species named after oneself; but especially because it sometimes feels that, as plant conservationists, we have difficulty getting Seychellois to take sufficient interest in the smaller plant species, even though they pay such an important role in our environment,” said Katy Beaver.

Lindsay Chong Seng said that he was not expecting such recognition. “This is totally not expected. I am surprised as I do not know why people think that I deserve such, I have done what I could for the environment, nothing innovative but I am honoured.”

In the meantime more research is being done on a new lichen – a salmon coloured Opegrapha salmonea - which has been described from La Digue, Mahé, and Praslin.

Diederich explained that freshly collected specimens will be needed for DNA sequencing, allowing deeper analyses to place the species in the right group.  “To our knowledge, this beautiful and eye-catching species has never been collected in other countries and might be endemic to Seychelles.”