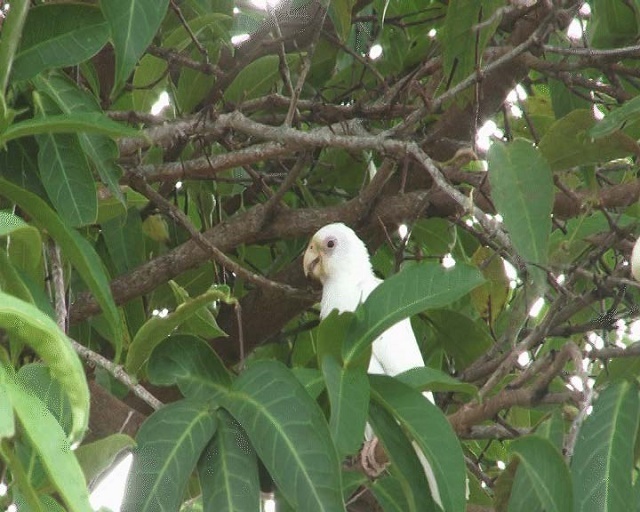 The bird was caught at Baie Ste Anne, one of the two districts on Praslin (Seychelles Islands Foundation)

After two years of efforts, a rare white-feathered black parrot was caught and released recently, providing the Seychelles Island Foundation (SIF) with data on the unusual bird.

The bird was caught at Baie Ste Anne, one of the two districts on Praslin, the only island in Seychelles – an archipelago in the western Indian Ocean - where the black parrot can be found.

Dubbed Snow White on social media, the bird should be brownish-grey in colour, the typical colour of the black parrot.

The foundation's senior ranger and black parrot team leader, Terrence Payet, was finally able to take a closer look at the strange bird.

“We did all the necessary tests and measurements and took blood samples so that we can finally identify if it is an albino or not,” said Payet, who adds that tests will also confirm whether it is a male or female.

The bird was kept in a cage for one night to recuperate before being released with a clean bill of health the next day.

Albino birds are often at a disadvantage compared to typically coloured individuals of the species, because their feathers lack melanin and tend to be weaker – therefore there is the need for continuous follow-up of the bird and for running genetic tests.

According to the Marc Jean-Baptiste, manager of the Vallee de Mai - a UNESCO World Heritage site and the main habitat of the black parrot - the tests will be an eye-opener on the species which is globally classified as "vulnerable" by the International Union for the Conservation of Nature (IUCN).

“We hope it clears any doubt that the inhabitants of Praslin Island and other conservationists have that this was hopefully simply a glitch in nature.”

It was a few days before Christmas day that the parrot was caught on the property of island resident Jude Monnaie.

Speaking to the staff of Foundation in a documented interview, Monnaie says it was his friend who first saw the bird entangled in some banana trees and unable to fly. “I think it may have been feeding on my star fruit tree and as it started to rain heavily, maybe it got trapped and it could not fly away,” he said.

A first-ever Seychelles black parrot of white feathers was recorded on the island of Praslin in early 2015. This prompted the Seychelles Islands Foundation and its partners in November that year to launch several incentives to catch and release the immaculately white bird dubbed “snow white” on social media.

These efforts were intensified during the breeding season for the species which spans from October to March but the bird continued to elude the Foundation’s staff. Although called black parrot  - a species proudly recognised as the national bird of Seychelles - the bird is usually of a dark brownish-grey colour.

Species » Be a reporter: Write and send your article » Subscribe for news alert
Tags: UNESCO World Heritage Site, International Union for the Conservation of Nature