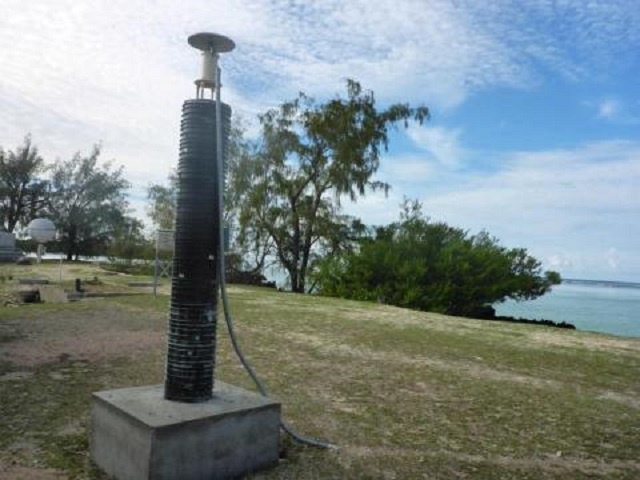 Fitted by a team of researchers led by Olivier Bousquet from the University of Reunion, the equipment aims at recording changes in humidity levels. The GPS ground station sends a repeated signal, and the time it takes for the signal to be received by satellites indicates the water vapour concentration in the atmosphere.

Aldabra, one of the world’s largest atolls, is one of Seychelles’ UNESCO World Heritage sites. Data collected from the station will help measure climate change, improve cyclone forecasting and cyclone warning systems.

Though the inner islands of Seychelles, an archipelago in the western Indian Ocean, are not prone to cyclones, the same cannot be said for the outer islands, Aldabra included. Appoo explained that cyclones do not generally form within 5 degrees latitude of the equator but Aldabra and several other outer islands are significantly far south so that they are on the edge of the cyclone belt.

She added this was “evidenced by cyclone Fantala which devastated Farquhar in 2016.”

Fantala, the strongest tropical cyclone to form in the southwest Indian Ocean in recent years, hit Farquhar -- an outer island of Seychelles -- twice in April 2016 causing $4.5 million in damages and losses.

Appoo told SNA via email that “all climate models predict an increase in sea surface temperature over the next few decades. Consequently, researchers expect a significant increase in the number of very intense tropical cyclones as well as variations in the cyclone belt itself.”

“An unusual number of very intense tropical cyclones have already been observed in the last four years in the South Western Indian Ocean (SWIO),” said Appoo.

She added that the equipment installed on Aldabra aims to record these changes and reinforces the observational capabilities in this region of the Indian Ocean.

As the equipment installed on Aldabra does not require a lot of ground management, it will be remotely managed by Météo-France & Laboratoire de L'Atmosphère et des Cyclones through the University of Reunion. The Seychelles Islands Foundation (SIF) which manages the atoll is responsible for the equipment.

According to the newsletter of the Foundation, the GPS station is part of a project called the ‘ReNovRisk-Cyclones’. “The main goal of the project is to study the meteorological and oceanographic impacts of cyclones on the territories of the South West Indian Ocean at present and in the future,” read the newsletter.

There are plans to install the equipment on Mahe, the main island, which will be managed by the Seychelles Meteorological Authority. Other than in Seychelles, similar GPS stations already exist on Reunion, a French Department in the Indian Ocean, Madagascar, the Comoros and Mauritius. The three-year European Union funded project is costing approximately $2.4 million.

Further data will be collected from seabirds tagged with temperature sensors. These sensors record the sea surface temperature as the birds come into contact with the surface of the water when they forage at sea.