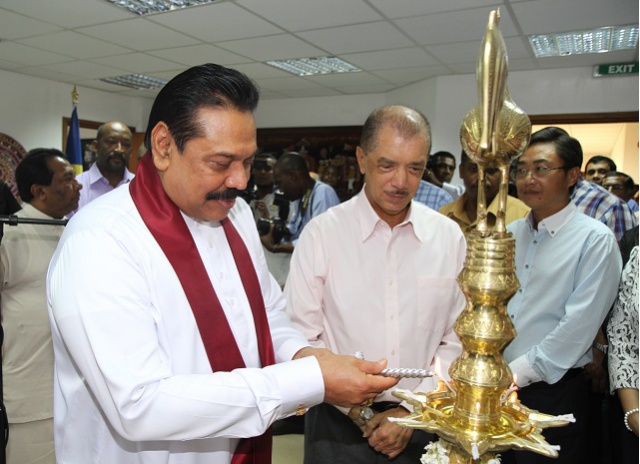 (Seychelles News Agency) - Seychelles has announced it plans to open a diplomatic mission in Sri Lanka later this year. This follows the visit of Sri Lankan President Mahinda Rajapaksa, who leaves Seychelles later today at the end of a three day official visit.

He leaves behind a permanent diplomatic presence with the opening yesterday afternoon of the first Sri Lankan High Commission in the Indian Ocean archipelago.

The Sri-Lankan head of state opened the High Commission office in the Capital City building in the Seychelles capital of Victoria in the presence of Seychelles President James Michel, Vice President Danny Faure and officials of the two countries.

Rajatha Piyatissa who recently presented his credentials to Michel as the new resident High Commissioner to the archipelago will be in charge of his country’s diplomatic mission.

Sri-Lankan Minister for External Relations, Gamini Lakshman Peiris, said the decision for his country to open a High Commission here follows the visit of President Michel to Sri-Lanka in 2012 which has resulted into strengthened ties between the two countries.

The ties were further strengthened last year with the first state visit of the Sri Lankan president to Seychelles.

Peiris said it is a highlight of his country’s foreign policy to relook at priorities and the realities of the modern world to strengthen relations, adding that in this constant re-evaluation and assessment the Seychelles Sri-Lanka relations has been given “the highest possible importance.”

The Sri-Lankan minister added that the setting up of a Seychelles-Sri-Lanka ‘Joint Commission’ is a focal point for discussing what needs to be done, to push the relations further still.

For his part, Seychelles Designated Minister Vincent Meriton, also Minister for Community development, Social Affairs and Sports, expressed the “appreciation of the Seychelles government for the strong expression of commitment in the shared future of our two countries.”

He hailed the opening of the High Commission as a milestone in the diplomatic relations between the two countries and as a reflection of the desire of the two nations to enjoy closer ties.

“It is an example of what can be achieved when two island nations are determined to work together,” said Meriton, adding that it signifies Seychelles’ government resolve to “engage with other countries to find solutions for global challenges.”

Meriton availed of the opportunity to announce that Seychelles will also open its High Commission in Colombo, Sri Lanka later this year. He added that the two offices will facilitate movements for visitors between the two countries as well as exchanges.

“Seychelles will become the gateway for Sri Lanka into Africa and Sri Lanka will be a gateway for Seychelles into Asia.” He hailed the vibrant Sri Lanka community which lives and works here and thanked them for their contribution in Seychelles’ development.

During his official visit to the Seychelles Rajapaksa also ceremonially opened the Seychelles branch of the Ceylon Bank as well as offices of the Sri Lanka Insurance company and the Mihin Lanka airline.

The areas of cooperation between Seychelles and Sri Lanka has also been extended to the medical field. The Sri Lankan president opened yesterday the medical centre of the Nawaloka Hospitals International.

The medical centre is based in the Le Chantier Mall building in the Victoria. Nawaloka Hospital Established was set up almost 30 years ago, in September 1985 with the objective of establishing it as a center of excellence in high technology diagnostic and curative facilities.