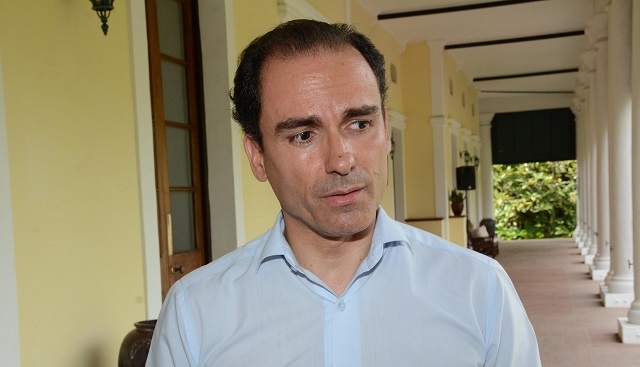 The UNODC’s representative said they are going to deploy an express in February from their office in Nairobi to work with Seychelles’ government on the strategies. (Patrick Joubert)

(Seychelles News Agency) - The United Nations Office on Drugs and Crime (UNODC) will reestablish its presence in Seychelles as of April, while the island nation will increase cooperation with the U.N. body, said the office’s new Eastern Africa representative.

Amado Philip de Andrés made these statements on Friday after a courtesy call to Seychelles’ president, Danny Faure, at State House, Victoria.

“The first good news that we had from the president is that we are going to reestablish our presence here as of the beginning of April. My UNODC officer will be the entry point for us to physically increase our cooperation and presence in Seychelles,” said de Andrés, who is based in Nairobi, Kenya.

The courtesy call was also an opportunity for the new UNODC representative to discuss other areas to increase cooperation, namely maritime security strategy, drug demand reduction and prison reform.

On maritime security, de Andrés said UNODC is thinking of using the Regional Fusion and Law Enforcement Centre for Safety and Security at Sea (REFLECS3) based in Seychelles for interregional exercises with Latin American and European countries. The centre is located at Bois De Rose, on the outskirts of Victoria, the capital.

He explained that there is more “than 250 tonnes of cocaine from Latin America coming to West Africa. When they arrive in West Africa, they can also reach Eastern Africa.”

New illegal substances being used by the younger population are seen as new challenges, he added.

“Maritime security is a very important angle, not only for the economic development of Seychelles but also for the security for the whole African continent,” said Andres.

Touching upon drug demand reduction, the UNODC’s representative said they are going to deploy an express in February from their office in Nairobi to work with Seychelles’ government on the strategies.

“We are going to combine the health angle with the law enforcement angle and support Seychelles in positioning itself as a leader in Africa in doing so,” said de Andrés.

He added that “drug addicts are basically sick people and we have to see the law enforcement and the health angle together, as part of the sustainable development goals that Seychelles is supporting so far.”

The discussion with the president touched on prison reform and Andres said it “is going to be one of the angles in which we will really push hard behind and support the government of Seychelles.”

He is confident that more progress will be made in the course of the next 18 months.

During his two-day visit in Seychelles, the UNODC representative also met the Chief Justice and told the press that he has “seen some of the best practices” in the judiciary system of Seychelles.

“If you compare it with not only some African good examples but also European and Asian, I would say that it is one of the top,” said de Andrés.

General » Be a reporter: Write and send your article » Subscribe for news alert
Tags: United Nations Office on Drugs and Crime, Regional Fusion and Law Enforcement Centre for Safety and Security at Sea