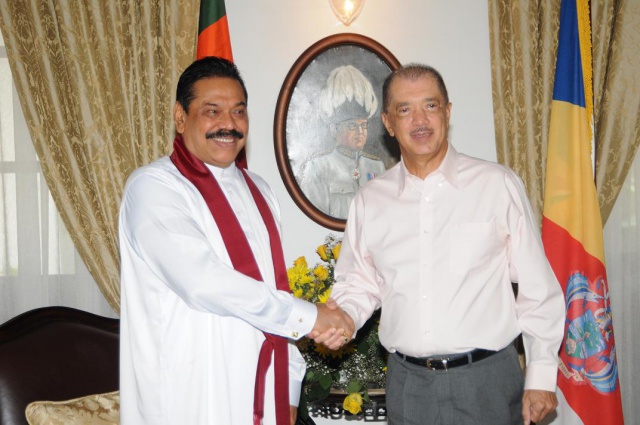 (Seychelles News Agency) - Seychelles and Sri Lanka are stepping up their exchanges in their bilateral relations with the signing of six agreements which cover the setting up of a joint commission on co-operation, political consultations, tourism, cultural co-operation, sports, power sector and renewable energy projects in Seychelles.

The signing ceremony of these six bilateral agreements took place this morning between the Sri Lanka Minister for External Affairs, Professor Gamini Lakshman Peiris and the Seychelles Designated Minister, Vincent Meriton at State House in Victoria, this morning.

The ceremony was witnessed by the Sri Lankan President, Mahinda Rajapaksa and Seychelles President , James Michel. Rajapaksa is on a 3-day working visit in the Indian Ocean island state.

The signing ceremony was preceded by a bilateral meeting attended also by Seychelles Vice President Danny Faure,as well as Sri Lankan and Seychellois ministers,  and officials from the Foreign Affairs, Tourism and Culture, Sports, Environment,  Environment  ministries and the National Assembly.

Both heads of state attended the opening of the bilateral meeting  followed by a private tete-a-tete meeting.

During the meeting Rajapaksa expressed Sri Lanka’ interest in developing the Blue Economy concept as well as their participation in the Small Island Developing States (SIDS) Forum to be held in Samoa September 2014, according to a press statement from the Seychelles' office of the President.

"The partnership that we have forged shows the rest of the world that we can achieve the south-south cooperation. Sri Lanka has a lot to offer and we can also share our experiences," said Michel in the statement.

At a luncheon hosted by the Seychelles president at State House, Michel said in a congratulatory toast; “We also greatly value your friendship in our joint efforts and action to mobilize the international community to address more effectively the needs and vulnerabilities of islands, to promote cooperation on environmental issues such as climate change and oceanic development and the implementation of the blue economy concept.”

In his reciprocal toast, Rajapaksa expressed his satisfaction that new agreements had been signed.

“As island nations in the Indian Ocean, we share many commonalities in values and cultural traditions.  Our people to people interactions continue to further enhance these connections… I have no doubt that this unique relationship will be further strengthened in the future for the mutual benefit of two countries and peoples,” said Rajapksa.

This is Rajapaksa’s second visit to the Indian Ocean archipelago following his state visit in June last year.

It comes seven months after Michel attended the Commonwealth Heads of Government meeting in Sri Lanka in November last year. Michel also went to Sri Lanka on a state visit in August 2012.