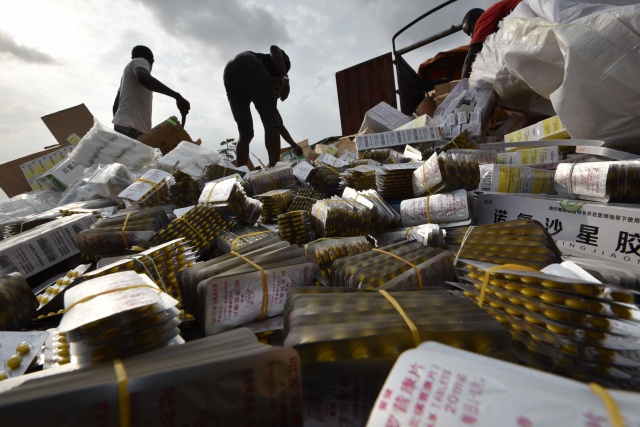 (FILES) This file photo taken on March 10, 2017 at the cemetery of Abobo district of Abidjan shows fake medecine bearing Chinese character as people unload boxes of counterfeit drugs from a truck. The turnover generated by counterfeiting is estimated at least 10 or 15% of the global pharmaceutical market (100 to 150 billion or 200 billion euros) according to a report of the World Economic Forum. (Sia KAMBOU / AFP)

(AFP) - There's nothing covert about Roxy -- a huge market in Abidjan selling counterfeit medicine, the scourge of Africa and the cause of around 100,000 deaths annually on the world's poorest continent.

Located in the bustling Adjame quarter of Ivory Coast's main city and commercial hub, the haven for fake medicine has been targeted time and again by authorities and stockpiles burnt.

But it resurfaces every time.

"The police hassle us but they themselves buy these medicines," said Mariam, one of the many mainly illiterate vendors who hawk everything from painkillers and antibiotics to anti-malaria and anti-retroviral treatments.

"When we are harassed we always come to an arrangement with them to resume our activities," she said.

Fatima, another hawker, said: "Many people come here with their prescriptions to buy medicine, even the owners of private clincs."

She said there was a "syndicate" controlling the sector that held regular meetings to fix prices and supply levels.

Fake medicines bring about some 100,000 deaths a year in the continent, according to the World Health Organization (WHO).

The illicit sector has a turnover of at least 10 percent of the world pharmaceutical business, meaning that it earns tens of billions of dollars a year, the Switzerland-based World Economic Forum estimates, adding that the figure has nearly tripled in five years.

"To sell fake medicines, you need a clientele. The ailing poor are more numerous in Africa than anywhere in the world," said Marc Gentilini, an expert on infectious and tropical diseases and a former head of the French Red Cross.

Gentilini said some meningitis vaccines sent a few years ago after an outbreak in arid Niger were fake. The disease kills thousands every year in the arid west African nation.

The WHO estimates that one out of 10 medicines in the world is fake but the figure can be as high as seven out of 10 in certain countries, especially in Africa.

The American Society of Tropical Medicine and Hygiene estimated in 2015 that 122,000 children under five died due to taking poor-quality antimalarials in sub-Saharan Africa, which, along with antibiotics as the two most in-demand, are the medicines most likely to be out-of-date or bad copies.

Interpol in August announced the seizure of 420 tonnes of counterfeit medicine in West Africa in a massive operation that involved about 1,000 police, customs and health officials in seven countries: Benin, Burkina Faso, Ivory Coast, Mali, Niger, Nigeria and Togo.

"This phenomenon is spreading: it's financial attractiveness draws criminal organisations of all sizes," he said.

Offenders remain largely unpunished worldwide and are mainly targeted for breaching intellectual property rights instead of being responsible for the deaths of hundreds of thousands of people, the Paris-based International Institute of Research Against Counterfeit Medicine says.

Experts have called for a global fight against the scourge.

Sanofi said it had in 2016 helped dismantle 27 clandestine laboratories, including 22 in China and the rest in Indonesia, Ukraine and Poland.

In countries where medical expenses -- from drugs to hospitalisation -- are not even partly reimbursed by the state, the relatively cheap price of street medication trumps the risk factor for many.

The outstanding exception on the continent in fighting the illicit drug trade is South Africa, which has a strictly-enforced licencing system.