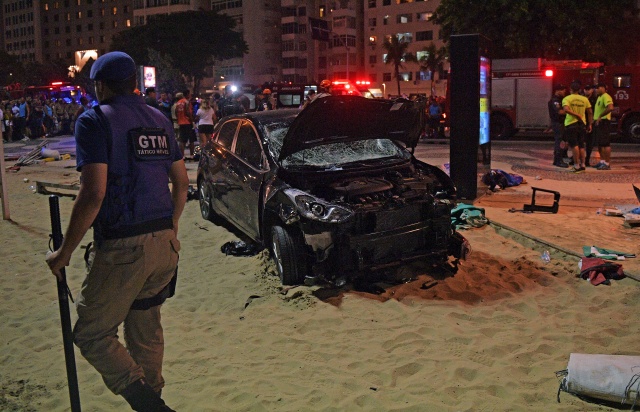 The scene of a car crash pictured at Copacabana beach in Rio de Janeiro on January 18, 2018. At least 11 people were injured by a car that drove up onto Copacabana's tourist-packed seafront promenade in the heart of Rio de Janeiro. (CARL DE SOUZA / AFP)

(AFP) - A car ploughed into a crowd on Rio de Janeiro's tourist-packed Copacabana seaside promenade on Thursday, killing a baby and injuring 17 people, authorities said, with the driver telling investigators he suffered a seizure.

The black car, its windshield shattered and the front caved in, came to rest on the beach where some of the injured were frantically being treated.

The Rio de Janeiro health secretariat told AFP that a nine-month-old baby girl was killed and 17 people injured in the crash.

The driver "lost control of his vehicle, which went up on the sidewalk of the promenade" and was taken for questioning, police said.

"The driver explained at the police station that he had an epileptic seizure, and anti-epileptic drugs were found in his vehicle," a military police colonel told AFP.

The early-evening incident happened while many people including tourists were enjoying the long promenade during the summer holidays.

"There was an injured child, I think he had a broken leg," Roberto Miguel, who works at a beachside restaurant, told AFP. "One man passed out too, another man had a broken leg and there was also a woman with a leg covered in blood."

Miguel said an angry crowd gathered around the car.

"He (the driver) stayed in the car until the police arrived and when he got out he was safe and fine," he said.

Cristo Forfinol, another beachside restaurant employee, said many injured victims had long waits to be treated, despite the crash occurring at one of Rio's star attractions.

"What shocked me was that the ambulances and the medics arrived more than 45 minutes later. There were people and children in pain and the rescue services came really late," he told AFP.