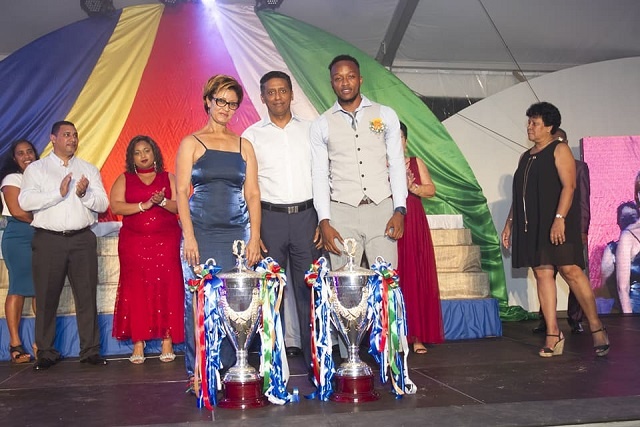 Seychelles' President Faure with Dylan Sicobo Best Sportsman of the Year and Lissa Labiche's mum in the absence of the high jumper. (State House)

The crowning ceremony took place on Saturday evening at the Berjaya Beau Vallon Beach on the northern side of the main island of Mahe.

The Seychellois high jump specialist was absent for the ceremony as she is on a scholarship training programme sponsored by the International Olympic Solidarity through the Seychelles Olympic and Commonwealth Games Association.

In receiving the prize on behalf of her daughter, Labiche’s mother said, “This award proves that Lissa has been serious in her sport, even though she became a mother she continued. I am very happy for her. I would like to encourage other girls who have had their baby not to stop now as life continues and they can achieve their dreams.”

For 20-year-old Dylan Sicobo, this is his first Best Sportsman of the Year award. He told the media that this is a great accomplishment for him.

“I am only 20, I have a long way to go and if I could be judged the best sportsman of the year then I am very happy. For the award going to two sportspersons in athletics, it shows that athletics is improving,” said Sicobo.

Sicobo, who is also on the scholarship training programme in Mauritius, succeeds Allan Julie, who was not on the list of candidates this year.

The best junior athlete title went to cyclist Stephen Belle who said that 2017 was tough.

“I had to sacrifice a lot on my own to go on overseas for training camps. For 2018, I hope to achieve my goal to become a professional cyclist and to do well in the African Championship,” explains Belle.

The criterion used to select the Seychelles best athlete is the performance with the highest being a gold medal in international competition. An athlete can also be chosen by setting a personal best or a national record in a high-level international competition and the top five are the Olympic Games, World Championships, World Cup, Commonwealth Games and Jeux de la Francophonie.

Both Sicobo and Labiche won the gold medal at the ‘Jeux de la Francophonie’ in Abidjan, Ivory Coast in July last year. Labiche equalised the game’s record and Sicobo won the 100 metres setting a new national record of 10.33 seconds.

In the crowning ceremony for Best Sportsmen of Seychelles, an archipelago in the western Indian Ocean, the best athletes in 27 sports discipline were awarded as well as the best coach and best federation.