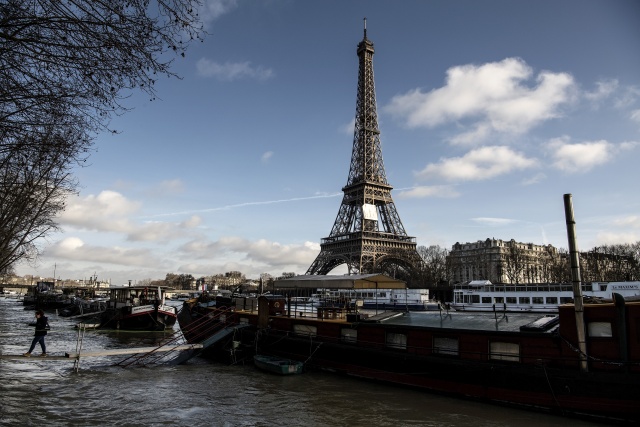 A woman uses a temporary foot bridge to leave a barge moored on the swollen Seine river in Paris on January 26, 2018. (CHRISTOPHE ARCHAMBAULT / AFP)

(AFP) - Leaks were starting to appear Friday in the basements of Paris buildings as the Seine inched higher, with forecasters warning that the river could stay high throughout next week, especially if more rain is dumped on France.

The Vigicrues flooding agency scaled back its peak predictions for the river in the capital, saying it will top out at 5.8 to 6 metres (19 to 19.7 feet) between Saturday afternoon and Sunday morning, compared with 6.2 metres previously.

That would still bring the Seine four to five metres above its normal height, causing headaches for commuters as well as people living near its overflowing banks.

It's enough to worry Joao de Macedo, superintendant at a residential building in Paris's 16th Arrondissement.

"There are six studios in the basement, and we've had to set up cinderblocks outside to keep the windows from breaking and covering everything in water," he said.

Inside the studios, tables and dressers have been lifted off the floor as water seeps through the walls.

In the streets outside, where the river was nearly lapping the tires of parked vehicles, a young woman found it "great to see ducks instead of cars".

The December-January period is now the third-wettest on record since data collection began in 1900, according to Meteo France.

But forecasters said the rainfall in recent days had not been enough to push the Seine beyond their expectations.

"We've been reassured, it will keep the water level high but not lift it," said Francois Duquesne of the Vigicrues floods agency, though he warned of the risk for more rain next week.

"If it rains again starting toward the middle of next week, something I'm not sure of at this point, we're not necessarily done with this yet," said Marc Mortureux, risk prevention director at the French environment ministry.

But even once the water levels start to recede, forecasters say it will be slow process, since much of the ground in northern France is already waterlogged.

A main commuter line, the RER C, has halted service at Paris stops through Wednesday, and some expressways that run alongside the Seine have been closed.

The Louvre, Musee d'Orsay and Orangerie museums are on high alert, with the lower level of the Louvre's Islamic arts wing closed to visitors.

All boat traffic on the Seine in Paris and upstream has been stopped, keeping tourists off the capital's famed sightseeing boats.

In Paris the Seine flows through a deep channel, limiting the potential flooding damage to riverside structures.

But several areas on the outskirts of the capital are under water, such as the southern suburb of Villeneuve-Saint-Georges, where some residents were getting around by boat and dozens have been evacuated from their homes.

Elsewhere in the Seine basin, the Yonne department south of Paris was seeing "significant flooding" Friday, the prefecture said, blocking access to about 40 roads and forcing a school to close.

Towns downstream from Paris are expected to be affected in the coming days.

Elsewhere in the country, flooding on the Normandy coast had required the authorities to cut drinking water to nearly 34,000 residents in the Seine-Maritime and Eure departments on Friday, the regional health agency said.

And in the east, a red alert was issued for the Saone river, where flooding was expected to hit the towns of Chalon-sur-Saone and Macon.

General » Be a reporter: Write and send your article » Subscribe for news alert
Tags: France, flooding