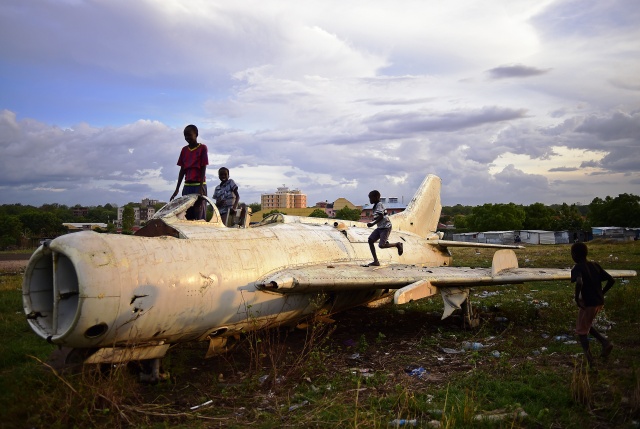 Children play on a destroyed fighter plane in Juba on April 21, 2016. Fragile hopes for an end to South Sudan's civil war are being tested by the rebel leader's failure to return to the capital to form a unity government. International pressure is growing after Riek Machar, a former rebel leader turned deputy president who was fired, became a rebel leader again and has now fought his way back to the vice presidency, failed to appear in Juba as expected on April 18 or 19. (CARL DE SOUZA / AFP)

(AFP) - African Union chief Moussa Faki said Sunday that "the time has come" to slap sanctions on those blocking peace in South Sudan, one of the most intractable wars facing African leaders as they meet in Ethiopia.

At the opening of the 30th annual African Union summit in Addis Ababa, Faki deplored the "unbelievable cruelty" and "senseless violence" of warring parties in South Sudan, which has been torn apart by conflict since December 2013, just two years after gaining independence.

Tens of thousands have died and nearly four million South Sudanese have been driven from their homes, while millions are going hungry in a humanitarian crisis expected to worsen as the lean season sets in.

Efforts to revitalise a 2015 peace agreement resulted in a ceasefire in December which lasted just hours before warring parties accused each other of breaking the truce.

"The time has come to sanction those who are blocking peace," said Faki.

The United States, the main backer of South Sudanese independence and biggest aid donor to the country, again called for an arms embargo last week in front of the UN Security Council.

Previous efforts to impose a weapons embargo and sanctions have failed with some member states arguing this would be counterproductive to peace efforts.

UN ambassador Nikki Haley told the Security Council that President Salva Kiir's government was "increasingly proving itself to be an unfit partner" in efforts to restore peace.

She urged African leaders gathered for the summit to "consider seriously the accountability measures it pledged for those who refuse to pursue peace."

Festus Mogae, a former president of Botswana who leads an international ceasefire monitoring team, on Saturday called for "clear consequences" for those who violate the truce and urged regional trade bloc IGAD not to "maintain a unified approach".

"For the revitalisation process to be successful there must be a clear understanding among all South Sudanese leaders of the consequences of non-compliance and the determination of IGAD to ensure that agreements are complied with," he said.

South Sudan descended into war in December 2013 when Kiir accused his former deputy Riek Machar of plotting a coup.

A peace deal was signed two years later but collapsed in July 2016 when fresh fighting in the capital Juba forced Machar into exile. The renewed violence spread across the country, and numerous new armed opposition groups have formed, further complicating peace efforts.