US threatens new sanctions as Russia laughs off Putin list 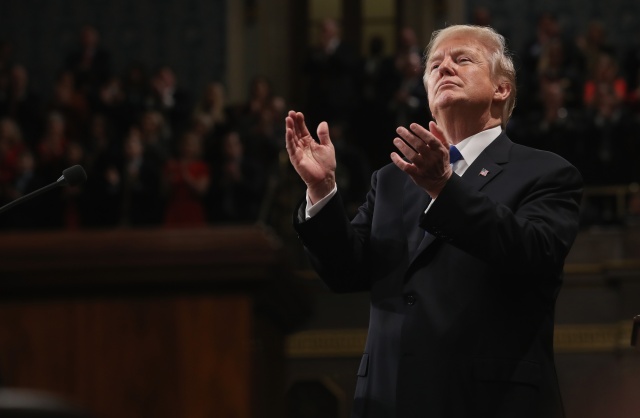 US President Donald Trump claps during the State of the Union address in the chamber of the US House of Representatives in Washington, DC, on January 30, 2018.
(Win McNamee / POOL / AFP)

(AFP) - The United States warned Tuesday that it may soon impose new sanctions on Russian figures, after Vladimir Putin laughed off the release of a US target list of his closest and richest allies.

The world was braced for a US sanctions onslaught on Monday when a new law came into effect 180 days after President Donald Trump, still hopeful for warmer ties, begrudgingly signed it.

But to general surprise, Washington declined to identify any companies or individuals to face new measures, and the Treasury contented itself with issuing a list of top Russian officials and super-rich businessmen it regards as Putin's inner circle.

The people on the list will not face immediate action -- despite calls for Moscow to be punished for alleged interference in the 2016 US election -- and Putin dismissed the United States' latest "unfriendly act" as a minor inconvenience.

US officials admitted the public version of the list had been drawn up based on publicly available data such as Forbes Magazine's annual lists of the super wealthy, and Putin joked that he was upset not to have been included himself.

"I am offended, you know," Putin told his supporters with a smile, citing a famous line from a popular Soviet-era movie.

The 65-year-old Russian president -- who is running for re-election -- said he had not seen the list and quoted an old proverb, "the dogs bark but the caravan goes on," to play down the significance of Washington's report.

Many in Washington were underwhelmed by the enactment of the Countering America's Adversaries Through Sanctions Act (CAATSA), which Congress passed last year in the teeth of opposition from the White House to force a reluctant Trump to take on Russia.

But Treasury Secretary Steven Mnuchin told the Senate there would be more action under this or one of the other acts giving the US administration authority to punish Russia for human rights abuses, election interference or intervention in neighbors like Ukraine.

"In the near future, you'll see additional sanctions," Mnuchin said during Senate testimony. "In the next several months, maybe a month, I want to be careful in making that commitment."

Democratic lawmakers pressed Mnuchin to defend the administration's decision to hold off on new sanctions.

"There was an extraordinary amount of work that went into this," Mnuchin said of the list.

There is a classified annex to the report which may go into more detail about what Washington knows about the oligarchs' global holdings and their ties to officials in Putin's Kremlin, but the public list looks like what it is: a list of famous Russians.

"Our sanctions going forward will be based upon a lot of the work that the intelligence community did," Mnuchin insisted. "We did not waive or delay."

The list is led by Prime Minister Dmitry Medvedev, one of 114 political or official figures on the list, alongside 96 people considered "oligarchs" worth at least $1 billion (805 million euros) each, like tycoons Roman Abramovich or Oleg Deripaska.

Putin said Washington's "Kremlin list" was a blow to not only the government and business circles, but to the entire country.

"Essentially, all of us, everyone out of the 146 million people have been put on some sort of list," Putin said.

He said the US report further complicates US-Russia ties as well as international relations, but added that -- while he has "reciprocal measures" in mind -- he would take no action for now.

"We are not interested in curtailing our ties with the United States," he said. "We know what we want. We want to build long-term, stable ties based on international law."

Putin is widely expected to win a fourth presidential term in March, extending his Kremlin rule until 2024 and becoming the longest-serving Russian leader since dictator Joseph Stalin.

Russia's credit rating agency ACRA said the US report had "not affected significantly the financial stability of our country."

Putin's bete noire, anti-corruption blogger Alexei Navalny -- who is barred from standing in the March election -- said the US list exceeded his expectations, adding that it features many of those he and his team had investigated in the past.

"I'd say this is a rather precise description of Putin's Kremlin mafia," the opposition politician told Echo of Moscow radio.

Washington imposed sanctions on Moscow following Russia's 2014 annexation of the Crimean peninsula from Ukraine and Moscow's meddling in eastern Ukraine.

Tensions between the two countries have grown despite Trump's promises to mend fences between the former Cold War-era enemies.

US intelligence agencies concluded in late 2016 that Putin had directed a broad effort to influence the presidential election that year.

Putin has sought to turn the tables on Washington, claiming the US wanted to see Navalny elected president.

General » Be a reporter: Write and send your article » Subscribe for news alert
Tags: US, Russia, sanctions, Putin