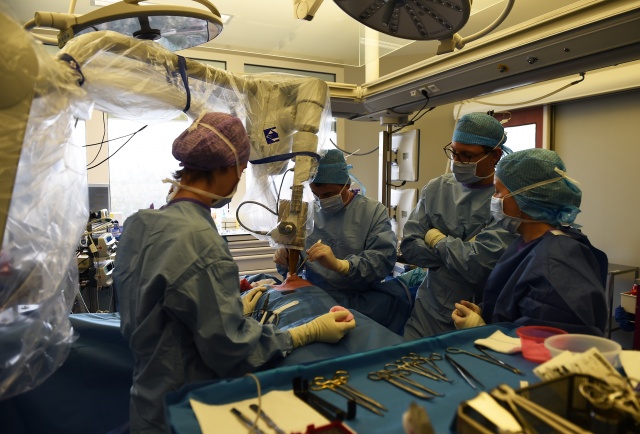 FILES) This file photo taken on November 2, 2017 shows surgical oncologist Max Buttarelli (C) carrying out intraoperative radiation therapy with an Intrabeam device on a breast cancer patient, in the surgical unit of the Paoli-Calmettes Institute overall cancer care centre in Marseille, southeastern France. Intraoperative radiotherapy is the application of a single dose of therapeutic levels of radiation using an Intrabeam device to the tumor bed after the cancerous tumor has been extracted and while the area is exposed during surgery. (ANNE-CHRISTINE POUJOULAT / AFP)

(AFP) - Cancer survival is increasing across the world but large gaps endure between nations, while some cancers remain hard to treat everywhere, according to a major review released Wednesday.

The progress, and the gap, are especially large for childhood cancers, according to the CONCORD-3 study covering 71 nations and 18 types of cancer, published in the medical journal The Lancet.

In the United States, Denmark, Sweden and Slovakia, the survival rate progressed to 80 percent or better. In Mexico and Brazil, however, less than 40 percent of children diagnosed with brain tumours survived in the 2010-2014 period.

Similarly, five-year survival for the most common type of childhood cancer -- acute lymphoblastic leukaemia -- rose to higher than 90 percent in Canada, the United States and nine European countries, but remained below 60 percent in China and Mexico.

"This likely reflects the availability and quality of diagnostic and treatment services," the authors said in a statement.

The world has seen across-the-board progress on breast cancer, the study showed.

For women diagnosed with the disease in the United States and Australia between 2010 and 2014, five-year survival was 90 percent. In 16 western European countries, the rate improved to 85 percent, and stood at 71 percent for eastern European nations.

In India, breast cancer survival improved during those five years to 66 percent.

Liver and lung cancers remain quick killers in both rich and developing countries, but the last 20 years have seen some progress.

"Greater international efforts are needed to understand the risk factors for this rapidly lethal cancer," said co-author Michel Coleman, a researcher at the London School of Hygiene & Tropical Medicine.

Led by Claudia Allemani from the London School of Hygiene & Tropical Medicine, the Concord-3 study marshalled hundreds of experts and more than 300 cancer registries covering 37.5 million cancer cases -- three-quarters of all the cancers diagnosed worldwide from 2000 to 2014.