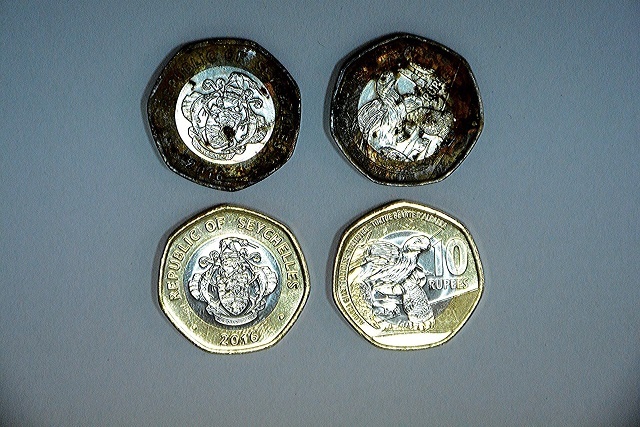 (Seychelles News Agency) - New 10 rupee coins will soon be put into circulation to replace those currently being used, which have a tendency to rust, a top official of the Central Bank of Seychelles said earlier this week.

The head of the banking services in the Central Bank, Mike Tirant, said that 5 million pieces of coins with a new metal composition will be produced and circulated in the first three months of this year.

Made of nickel plated and nickel brass, the new coins are expected to be more resilient to the climate than the previous ones which although were nickel plated had brass plated steel.

The switch is being made after the Royal Mint in the UK reported that the rusted look seen on the 10 rupee coins already in circulation since December 2016 is caused by Seychelles’ climate and exposure to seawater.

Reports of the rusted 10 rupee coins began barely a month after they were put in circulation by the Central Bank of Seychelles to replace the 10 rupee notes. The damaged coins were sent to the UK for analysis.

Simon Lake, Director of Sales of the Royal Mint, said, “It appears that the climate in Seychelles and the way that the people use the coin exposes them to sea water which causes this explosion that looks like rust on the surface of the coin.”

He added that this is the first time that the Royal Mint -- a company that the Seychelles’ Central Bank has been working with since 1982 -- encountered such an issue after 150 years of service.

“As there are no visible differences between the two coins both batches will be circulate alongside each other and the 2016 coins will be gradually taken out of circulation through the normal process of daily withdrawals and deposits by the commercial banks,” added Tirant.

On the report of the coins falling apart, Tirant said, “Royal Mint has done some testing to see how much force is required to remove the inner and outer part of the coin.” Since it takes a lot of force to do that and as it cannot be done through normal wear and tear, Tirant added that it has to have been tempered with.

Tirant said that the handling of banknotes and coins in Seychelles, a group of 115 islands in the western Indian Ocean, has to be improved and people need to take more care with their money.