All 955 miners trapped in S.Africa rescued 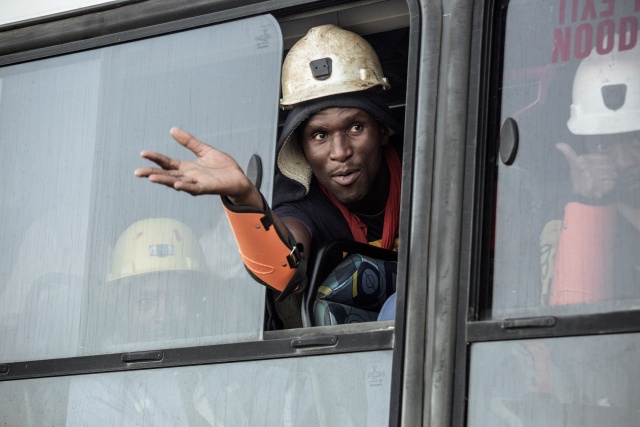 A rescued miner gestures out a bus window carrying some of the hundreds of miners rescued from the Beatrix gold mine shaft number 3 where nearly 1,000 miners were trapped underground following a power outage, in Theunissen on February 2, 2018. Hundreds of gold miners among almost a thousand trapped underground for more than a day in South Africa following a power-cut resurfaced on February 2, mining company Sibanye Gold said, as a rescue effort moved into full swing.(GIANLUIGI GUERCIA / AFP)

(AFP) - All 955 gold miners trapped underground for more than a day in South Africa after a power cut were rescued unharmed on Friday, to the joy of waiting relatives.

"Everybody's out," mine spokesman James Wellsted told AFP, adding that there were no deaths or serious injuries.

There were "cases of dehydration and high blood pressure but nothing serious", he said.

The miners were stuck in the Beatrix gold mine, near the central city of Welkom, for around 30 hours after a massive power outage caused by a storm prevented lifts from bringing workers on the night shift to the surface.

After several hours, engineers were able to restore power, allowing the hoist to bring up the miners -- who had been trapped since Wednesday evening -- in batches.

"It was stressful, there was not enough ventilation," mineworker Mike Khonto told AFP. "Thankfully our management managed to send us food and water."

Wellsted said there was "no indication so far that anyone has been in distress", although it was a "traumatic experience".

"We are relieved," a young woman, who spent the night anxiously waiting near the mine for news of her uncle, told AFP, without giving her name.

She had been among miners' relatives who gathered along the road leading to the shaft, kept at a distance by security guards.

Neal Froneman, chief executive of the Sibanye-Stillwater mining company, said in a statement the operation was a "significant rescue effort".

At sunrise the rescued workers, still in their workwear and helmets, underwent medical check-ups and left by bus.

The incident at the mine in Free State province, 290 kilometres (180 miles) southwest of Johannesburg, has reignited safety concerns in the sector.

"We could have prevented it," said one mineworker who asked not to be named.

"They should have had some generators that were working. Security is the least of their worries. They only care about production."

Sibanye had said it hoped to resume operations on Monday, but trade unions said it should stay shut until a safety probe is completed.

The National Union of Mineworkers instructed employees to refuse to work in "dangerous conditions".

"Major multinational corporations like Sibanye-Stillwater, which should be industry leaders in creating a safety culture, are doing far too little to prevent accidents," it said.

A parliamentary committee on mining, called for "drastic actions to such acts of carelessness, including exploring possibilities of laying criminal charges against the management."

It condemned as "utterly unacceptable" the lack of a working back-up plan to bring the workers to the surface.

"We will investigate the issues of negligence and generator (failure)," said mines minister Mosebenzi Zwane.

But Sibanye-Stillwater spokesman Wellsted told AFP that "this was a very unusual event. The generators were affected by the storm."

Last August five mineworkers died after sections of a gold mine collapsed outside Johannesburg.

In 2016 three workers stationed on the surface of a coal mine were buried when ground caved in. They were never found.

The country possesses rich mineral reserves and has some of the world's deepest gold mines.

Gold was for many decades the backbone of South Africa's economy, but production has declined sharply due to depletion of reserves.

Sibanye-Stillwater was created five years ago and is now South Africa's largest gold producer, after embarking on a string of acquisitions.

In May 2017 it bought America's Stillwater mining company to become Sibanye-Stillwater.

The Johannesburg Stock Exchange and NYSE-listed firm is also involved in platinum mining, and in December 2017 announced plans to buyout Lonmin, the world's third largest producer.

Africa » Be a reporter: Write and send your article » Subscribe for news alert
Tags: SAfrica, mining