Protesters say no to naval base on Seychelles’ Assumption Island 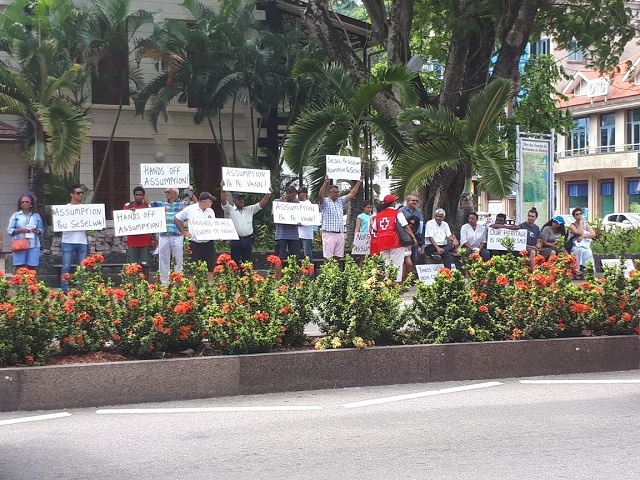 A group of around 50 protested in the capital of Seychelles. (Seychelles News Agency)

(Seychelles News Agency) - A group of around 50 concerned citizens held a protest on Saturday in the capital city of Victoria against the construction of a naval base on Seychelles’ Assumption Island.

The protest which lasted for around two and a half hours comes after Seychelles and India signed a 20-year agreement last week that will enable the construction of military infrastructures on Assumption Island.

Ralph Volcere, one of the organisers of the protest, told SNA that Seychellois do not want this project, as the details were not made public.

“This agreement is not being supported by the people of Seychelles. We do not know any details, what is the arrangement? What are the costs? Our problem is that Seychelles cannot get involved in conflicts of superpowers. We need to remain nonaligned, friendly to all – enemy to none,” Volcere said.

Volcere said that though there has been talked about the base since 2015, everything was kept secret, adding that it was only a couple of weeks ago that the issue was brought back again and the signing was held soon after. “This facility on Assumption will place Seychelles at great risk should a military conflict involving India ever happen. We are dealing with countries with nuclear powers here.”

Volcere added that it is not right for the government to give away the island which is part of the Seychelles heritage. “We are therefore asking the assembly not to go through with the ratification of this agreement. When this goes to the national assembly we will hold a march from town to the parliament to continue with our protest.”

The group protested peacefully in the centre of Victoria, the capital, close to the clock tower with banners from around 9.30 a.m. to 12 noon. The police were present to ensure that law and order were maintained during the protest.

Another demonstrator, Vicky Lanza, told SNA that a project of this magnitude has catastrophic impacts on the islands pristine environment.

“Assumption is close to the Aldabra Atoll - rich biodiversity, unique plants and animals and an abundance of birds. We need to protect the atoll. Once there is a military base, there will be an element of control and locals will not have access even in the vicinity the island," said Lanza.

The issue of giving away the country’s sovereignty is also what Tony Juliette talked about.

“We are taking this too lightly we cannot just take one of our islands and give it to another country. This is too dangerous and it does not make sense. This is a reckless move by the government.”

Roy Finesse said that he came to the protest with only one message.  “My message to all Seychellois is - let’s sell coconut, let’s sell guano but our islands are not for sale.”

Marlene Moncherry said that her presence at the protest is not for political reasons but rather as a concerned Seychellois.

“I am here because I believe that our islands are ours, for Seychelles and should not be given to any other country. We do not want another country taking over Assumption.  We also want the leaders to shed some light on what is happening.”

The agreement was signed for the second time last Saturday after revisions were made to the previous one. In the revised agreement, the main aim is to provide a framework for assistance to Seychelles – a group of islands in the western of Indian Ocean - by India.

It will help enhance the military capabilities in control and maritime surveillance of the island nation’s Exclusive Economic Zone of 1.37 million square km., protection of the EEZ and the outer islands, and search and rescue in the region for the benefit of air and shipping traffic.

The project will cover about a quarter of Assumption, a remote island some 1,140 southwest of the Seychelles main island of Mahe.