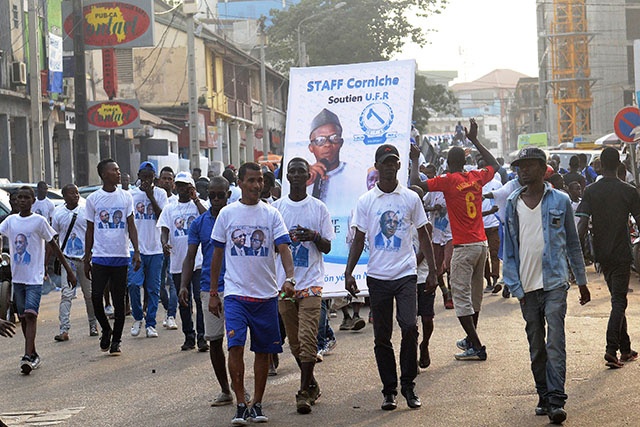 Supporters of Guinea's Union of Republican Forces (UFR) political party celebrate during a campaign meeting on February 2, 2018 in Conakry. Guinea will hold the first local council and assembly elections since 2005 on February 4, 2018.
CELLOU BINANI / AFP

(AFP) - Guinea holds its first local elections since the end of the era of military dictatorship on Sunday, as voting gets underway to elect municipal councils following eight years of delays.

The elections, originally scheduled in 2010, have been repeatedly delayed due to a lack of funds, political infighting and the 2013-16 Ebola crisis.

Failing schools, unemployment, electricity shortages and corruption allegations are all election issues in the West African country, and some voters have vowed to stay at home.

"It's just a load of noise," Salimatou Sow, a market vendor, told AFP.

"Once they are elected, they will forget all their promises, make themselves rich off the back of the people and forget rubbish collection, street cleaning, and job creation," she added.

Guinea gained independence from France under "father of independence" turned paranoid dictator Ahmed Sekou Toure, who ruled until his death in 1984.

The authoritarian General Lansane Conte then seized power in a coup.

Following his death in 2008, the military took control until a transition to civilian rule when President Alpha Conde was elected in 2010.

More than 5.9 million Guineans are registered to vote in the polls from 7am (0700 GMT).

In 2005, under General Conte's rule, the ruling party took 80 percent of the vote and consequently the vast majority of voting districts.

Due to the lack of elections, council executives from the time have been controversially replaced with appointees named by Conde, who will now face scrutiny in Guinea's democracy for the first time.

An agreement reached in October 2016 between the government, opposition, civil society and international partners in Guinea paved the way for elections in February 2017.

Sixty percent of Guinea's population is 25 and under, whose memories of Conte and military rule are hazy or non-existent.

Their priorities including improvements to Guinea's cash-strapped education system and jobs to address sky-high youth unemployment.

Ibrahima Camara, local campaign manager for the Union of Republican Forces (UFR) of former prime minister Sidya Toure, said the vote could be a "springboard" for Toure as he mounts a third attempt at the presidency in 2020.

The key battleground with Conde's ruling Rally for the Guinean People (RPG) will be in the western area of Kindia and southern city of N'Zerekore, which was heavily affected by Ebola.