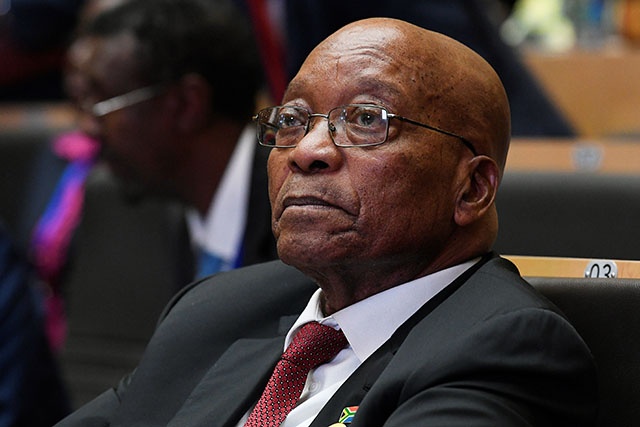 Senior members of South Africa's ANC party will hold an emergency meeting Monday to discuss whether President Jacob Zuma should stay in office after he reportedly refused to resign. SIMON MAINA / AFP

(AFP) - Senior members of South Africa's ANC party will hold an emergency meeting Monday to discuss whether President Jacob Zuma should stay in office after he reportedly refused to resign.

Zuma, whose presidency has been engulfed by corruption scandals, is due to deliver the annual state of the nation address on Thursday, despite growing calls for him to step down.

Some African National Congress (ANC) members are pushing for Cyril Ramaphosa, the new head of the party, to replace Zuma as president immediately.

But Zuma loyalists have said that the president should complete his second and final term in office, which would end when elections are held next year.

The ANC's 26-person National Working Committee was due at meet at Luthuli House, the party headquarters in Johannesburg, at 2:00 pm (1200 GMT).

"Yes, it is happening, it will be dealing with this situation," a party official told AFP, declining to be named, in reply to a question about the meeting and media speculation over Zuma's possible exit.

Zuma's presidency has been dominated by graft scandals. He faces several court cases, including over 783 payments he allegedly received linked to an arms deal before he came to power in 2009.

His hold on the ANC was shaken when his chosen successor -- his former wife Nkosazana Dlamini-Zuma -- lost out to Ramaphosa in the closely-fought race to be party leader in December.

Julius Malema, a former ally who left the ANC to form the opposition Economic Freedom Fighters party, said that the president had refused to resign at late-night talks on Sunday.

"He told them to take a decision to remove him if they so wish to do so because he didn't do anything wrong to the country," Malema wrote on Twitter, without naming his sources.

Ramaphosa is looking to revive the economy before the 2019 elections that come amid falling public support for ANC.

He recently said that Zuma, 75, was "naturally feeling anxious" about the transition of power, and vowed the process would be handled "very carefully".

Zuma, in office since 2009, could leave office either by resigning, through losing a motion of no-confidence in parliament or impeachment proceedings.

He could also be recalled by the ANC, forcing him to step down.

Ramaphosa, 65, is a former trade unionist who led talks to end white-minority rule in the early 1990s and then became a multi-millionaire businessman before returning to politics.