3 candidates to vie for National Assembly seat vacated by speaker; vote is Feb. 24-25 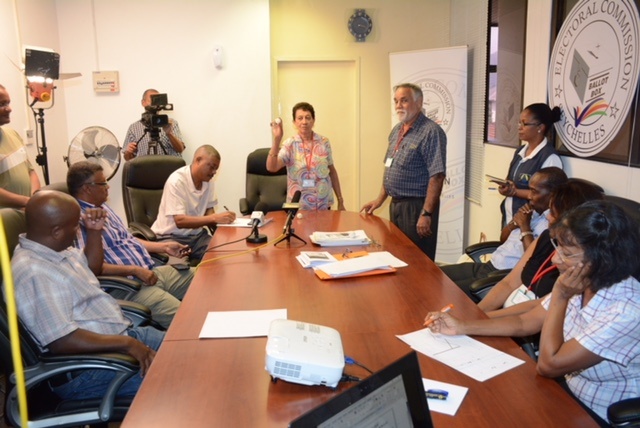 Three candidates submitted their nominations on Monday for the bi-election in the Anse Boileau district. (Joena Meme)

(Seychelles News Agency) - Three candidates will be contesting the National Assembly bi-election in Seychelles for the Anse Boileau electoral area, a vote scheduled for the weekend of February 24 -25.

The president’s party Lepep did not submit a candidate.

The three candidates who submitted their nominations on Monday are Louis Loizeau of the Seychelles Patriotic Movement (SPM), Phillip Arissol of the opposition coalition Linyon Demokratik Seselwa (LDS) and independent candidate Ralph Volcere.

The bi-election at the end of February follows the resignation of Anse Boileau’s elected National Assembly member, Patrick Pillay, who resigned both as the speaker and as the Member of the National Assembly for the southern Mahe district.

Philip Arrisol, the candidate for LDS, which has a majority of seats in the Assembly, told media he will work to regain the people’s trust in the opposition group.

“I am here to work on what the former representative has established. Everything happens for a reason and I am not here to dwell on past mistake made,” said Arrisol.

Lepep, the party holding the presidency in Seychelles, a group of 115 islands in the western Indian Ocean, announced that it will not take part in the bi-election.

Lepep representative Simon Gill said, “We don’t want to form part of such a process as we have realised that the resignation of Patrick Pillay as speaker and representative of the Anse Boileau district in the assembly will cost the country.”

Gill said, however, the party remains committed to take part in any future elections that will not have a negative impact on the country.

Loizeau, who is representing the Seychelles Patriotic Movement (SPM), said that with all the incertitude in politics he found it a necessity to stand for the people of Anse Boileau and that after having lived there for 41 years he is giving something back for his district.

“Seychelles needs a representative that does not come from either of the two big political parties in the assembly. This will bring a new dynamic in the politics of Seychelles,” said Loizeau.

The bi-election will have one independent candidate, Volcere, who said that his main reason for participating is to push for the issue surrounding the remote island of Assumption.

“I want to use this opportunity to continue the protestation that we have started against the agreement signed between the Indian government and Seychelles to build a military base on Assumption,” said Volcere.