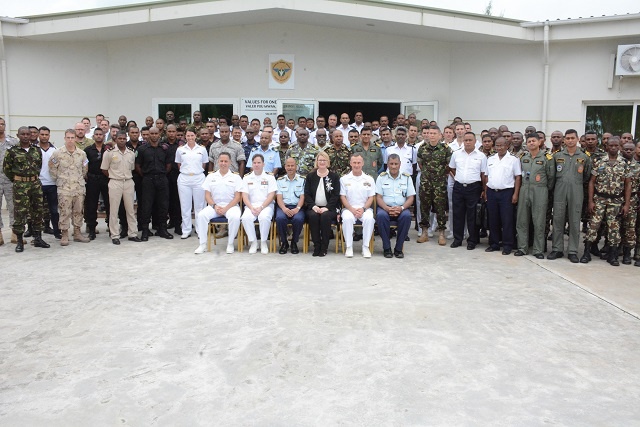 Cutlass Express which will end on Wednesday is sponsored by U.S. Africa Command (AFRICOM) and conducted by U.S. Naval Forces Africa (Joena Meme)

(Seychelles News Agency) - Drug trafficking, illegal fishing and piracy are the focus of Cutlass Express, the seventh annual multinational maritime exercise now being hosted by Seychelles for one week.

Cutlass Express which will end on Wednesday is sponsored by U.S. Africa Command (AFRICOM) and conducted by U.S. Naval Forces Africa (NAVAF) and brings together 17 countries from East Africa. It includes officers from regional navies, coastguards and maritime agencies of Seychelles, Comoros, Madagascar, Mauritius, Kenya, Tanzania, Mozambique and Djibouti among others.

Major Didace Hoareau, the Cutlass Express exercise coordinator at the Seychelles Coast Guard, said on Monday that the three threats that Cutlass Express focuses on are all equally alarming and have negative impacts on Seychelles.

“The trade of narcotics is halting our economic growth in terms of human resources, causing us to bring in more foreigners to work in the country,” said Hoareau.

He told the press that in the Cutlass Express exercise, officers are receiving both theory and practical sessions. On Monday, they were briefed on how to identify false compartments onboard a vessel and got the chance to put this in practice on a confiscated dhow, a type of sailing vessel common to the Gulf Arab states. Participants also practiced various ways of boarding vessels at sea through an exercise that was carried out close to St. Anne Island.

Earlier this year, the Supreme Court of Seychelles sentenced two Iranian nationals to life in prison for the importation of heroin and opium. The vessel the two men were on board was intercepted in a joint operation by the Seychelles Coast Guard and the National Drugs Enforcement Agency (NDEA).

Talking about illegal, unreported and unregulated fishing, Hoareau said that “it impacts us because of overfishing causing fish depletion.” He took the illegal fishing of sea cucumber by the intercepted Malagasy vessels as an example.

On piracy, Hoareau said “there is a drop in attacks but that doesn't mean that piracy has stopped and as long as Somalia is an unstable country. Piracy will always exist.”

The exercise is designed to assess and improve combined maritime law enforcement capacity and promote regional security in East Africa.

Zimmerman made this statement during the opening ceremony of the exercise last week at the Coast Guard base, Ile Perseverance, a reclaimed island on the outskirt of the capital Victoria. This year there are two operational areas for this exercise - Djibouti and Seychelles.

She added that “ensuring security, safety, and freedom of navigation in the waters surrounding Africa is critical to Africa’s prosperity and its access to global markets.”

The exercise, which started on January 31, saw the participation of 455 personnel, 12 vessels and three aircraft.