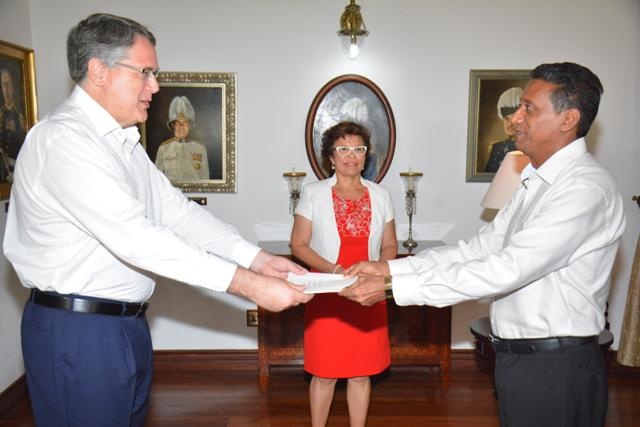 (Seychelles News Agency) - Maritime safety and the importance of good governance and strong institutions are areas of concern the newly accredited U.S. Ambassador to Seychelles discussed with the island nation’s president.

“On maritime security, I told the president that this is a matter that is extremely important to the United States as well. We have a long history of cooperation with the government of Seychelles on maritime security,” said Reimer.

He said that a good example of this is the ongoing seventh annual multinational maritime exercise - Cutlass Express - being held in Seychelles.

Cutlass Express, which ends on Wednesday, is sponsored by U.S. Africa Command (AFRICOM) and conducted by U.S. Naval Forces Africa (NAVAF) and brings together 17 countries from East Africa.

The exercise is designed to assess and improve combined maritime law enforcement capacity and promote regional security in Eastern Africa.

Talking about democratic institutions, Reimer said that the president told him that he has a “strong desire to strengthen institutions in Seychelles.

“I spoke a little bit about how important institutions have been for my country as we have gone through various crises in our history and the thing that sustained us throughout was strong democratic institutions,” said Reimer.

The newly accredited ambassador said the United States has a long history of cooperation and assistance with Seychelles in both areas.

“We have done a number of training for officials from the government of Seychelles and the security services. We anticipate that we will continue with this training and this assistance as strong as ever,” said Reimer.

The ambassador called on the vice–president, Vincent Meriton, where they again discussed maritime security, how important that was for the country of Seychelles. Reimer also brought up the importance of the Blue Economy.

The U.S. ambassador will be based in Port Louis, Mauritius and says his mandate depends on “on what president Trump desires.”