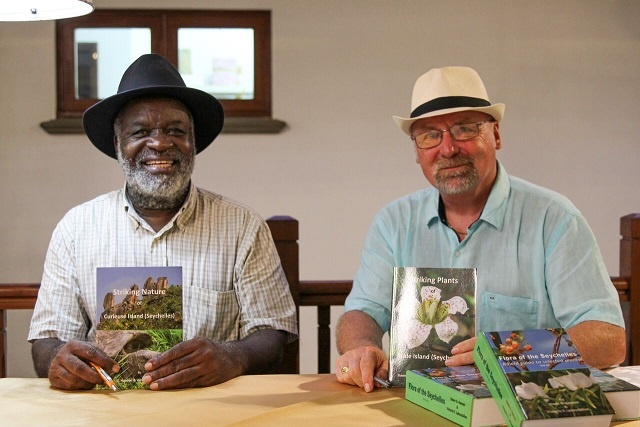 “The book highlights the history of the island as well as important information about the island’s natural beauty and richness, from the time of its discovery to the Marion Dufresne expedition to the leprosy colony. The different bushfires which ravaged the island over the years to the conservation work undertaken which has resulted in the island is a protected reserve today,” said Laboudallon.

The new book – Striking Nature of Curieuse Island - will sell at $25 and can be purchased from Laboudallon and Hansen or at bookstores.

Laboudallon said that the island has so much to offer to visitors and Seychellois. Readers of the book can also discover the different wildlife and nature trails which visitors get to enjoy on the island.

The book also gives details about the move in 1978 to transfer giant land tortoises from the Aldabra Atoll – a UNESCO world heritage – to the island.

The environmentalist said that the island also boasts one of the most magnificent views of Seychelles – a group islands in the western Indian Ocean – with a 360 degrees view.

Curieuse – a national and marine park managed by the Seychelles National Parks Authority – is located off the north coast of Praslin – the second-most populated island of Seychelles. It is notable for its bare red earth mountains. It is the only other island apart from Praslin, where the unique coco de mer palms grow naturally.

The book is the fourth which Laboudallon and Hansen have worked on since they started their collaboration in 2006. Hansen said that the two compliments each other.

“Everything has so far come from our resources. We were thinking of a book about the medicinal plants of Seychelles but unless we can get a help in form of sponsors this project will not materialize. Because there is a lot that goes into a book, besides the research, there are behind the scenes cost which a lot of people do not realize.”

Other publications by Hansen and Laboudallon include Flora of Seychelles, Vallee de Mai and the Striking plants of Aride Island.